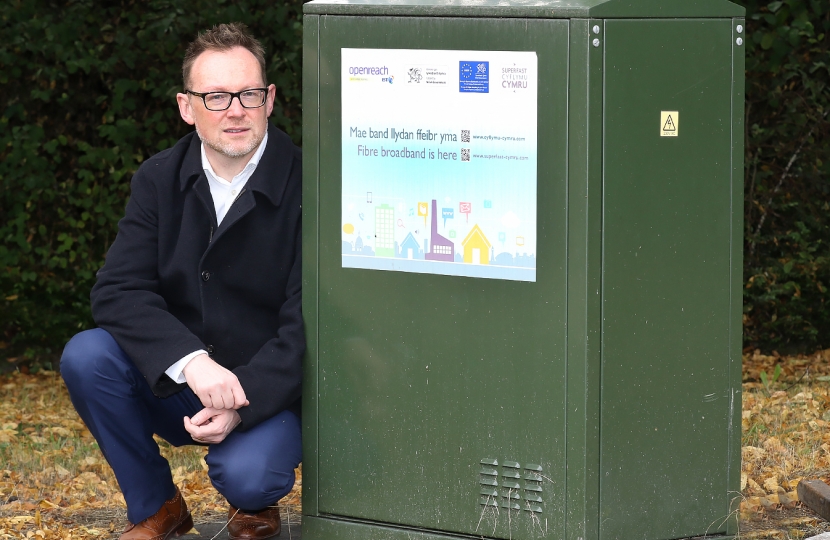 The Royal Welsh Agricultural Show has been holding virtual events this week focused on agriculture and rural matters, Welsh produce and the environment, one of which was co-hosted by the communications regulator, Ofcom and the farming union, the Farmers' Union of Wales.

Following Coronavirus restrictions which have led to the cancellation of the 2020 Royal Welsh Agricultural Show on the showground in Llanelwedd, the Member of the Welsh Parliament for Montgomeryshire, Russell George MS, attended the virtual session on "Unlocking Connectivity in Rural Wales".

The event, which brought together a panel chaired by the BBC's Catrin Haf Jones and comprised of Huw Saunders, Director of Infrastructure and Networks at Ofcom; Ben Lake MP (Ceredigion); Kim Mears OBE, Managing Director of Openreach; and Hamish McLeod and Gareth Elliott of Mobile UK, discussed whether there was any hope for those rural communities who remain unconnected.

"The Covid-19 pandemic has illustrated how dependent we are on digital connectivity, whether it is working from home or home schooling, so I was pleased to be able to attend Ofcom's and the FUW's virtual event on unlocking connectivity in rural Wales.

"However, while I have been able to attend this virtual event from my office here in Newtown, thousands of residents would have still been unable to do so from their rural locations around Montgomeryshire due to a lack of adequate broadband or non-existent mobile phone coverage.

"Ofcom and the farming unions have been hosting these events for over a decade to update us on what is happening to improve connectivity in rural areas and while there have undoubtedly been improvements, the reality of the situation is that the digital divide is widening with those in urban locations benefiting from ultrafast broadband and 4G mobile phone coverage and those in rural Wales left behind.

"For many communities across Montgomeryshire, broadband connectivity and decent mobile coverage remains a distant dream and I sympathise with this frustration from the “have nots” across North Powys.

"I continue to say that digital connectivity is now considered the fourth utility, is an essential part of modern life and is no longer a "nice to have" luxury. It is also essential for a thriving Mid Wales economy so from my perspective, I will keep asking probing questions of the Welsh Government, Openreach and the mobile network operators until such time as all people in Montgomeryshire are able to access decent digital connectivity.

"Some residents and businesses have received eye-watering estimates of £70k+ for bringing fibre broadband to their homes so I'm hoping that the additional funding and measures which have recently been announced by both the UK Government and Welsh Government through the Rural Gigabit Voucher Scheme and the Shared Rural Network will allow more people to obtain a decent broadband connection and mobile coverage.

"However, it is high time for these commercial companies to stop picking the low hanging fruit and start using public subsidy to prioritise those who have nothing and most need an upgrade before those who already receive an adequate service and are therefore relative "easy wins". I will also keep pressing for Welsh Government to make it easier for companies to invest in digital infrastructure through changes to the planning regime and non-domestic rate relief so that the urban-rural digital divide begins to narrow rather than widen yet further."