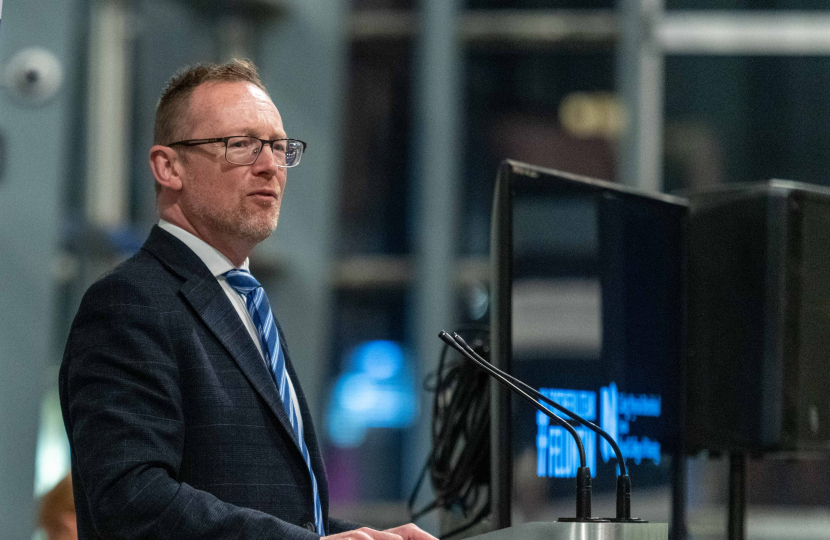 Montgomeryshire MS Russell George has called on the Welsh Government in Cardiff Bay to do more to support cancer patients in a Senedd debate.

Leading a debate in the Senedd, Russell George MS suggested measures such as free dental care for those undergoing radiotherapy and chemotherapy should be offered to alleviate the negative side-effects of treatments, allowing patients to focus more on their recovery without having to worry about extra costs.

Current cancer treatment times suggest that Welsh cancer services are not catching up on diagnosis and treatment: in November 2021, just 58% of patients newly diagnosed with cancer started their first definitive treatment within 62 days of first being suspected of cancer – far below the target of 75% and the second lowest on record since June 2019.

Meanwhile, cancer waiting lists in Wales continue to rise, with nearly 1-in-3 patient pathways taking over a year to treat, while the National Cancer Clinical Director for Wales has said that services will have to work at 120-130% of previous capacity to deal with increased numbers of patients.

Prior to the pandemic, the Welsh Cancer Intelligence Units data showed that Wales had the lowest survival rates for six cancers and the second lowest for three in the UK. Wales was already behind England, Scotland and Northern Ireland when it came to female breast, lung, colon, rectal and stomach cancers, and melanoma. It was also the second lowest in the UK for prostate, pancreatic and oesophageal cancers.

Mr George also called on ministers to publish a workforce recruitment and retention plan for cancer specialists and a full cancer strategy which will set out how Wales will tackle cancer over the next five years after years of understaffing in the sector.

While other UK nations have published full strategies, the Welsh Government have been criticised by charities for only releasing a short Quality Statement, which has been said to lack detail and ambition.

Commenting following the debate, the Montgomeryshire MS, who is also the Shadow Health Minister said:

“Welsh cancer services are struggling to cope with a tsunami of missed cancer diagnoses and the appearance of later stage cancers as a direct result of pausing NHS services during lockdowns.

“When this is added to years of chronic understaffing, it is easier to understand why cancer charities say that the Cancer Quality Statement lacks both detail and ambition – it is not a national strategy.

“However, even before Covid, Wales was already behind other UK nations in terms of cancer survival rates. Since then, there have been thousands of misdiagnoses, not helped by a drop in 40,000 people going to hospital for cancer treatment in the first year of the pandemic due to lockdowns.

“This is why we held a debate where I along with colleagues urged the Welsh Government to publish a workforce recruitment and retention plan and a full cancer strategy, as well as support cancer patients through their treatment to make easier the difficult side effects of treatments.”

“Given the prevalence of cancer, the people of Wales demand and deserve treatments that meet their needs, bringing them into line with the performances of services elsewhere in the country.”

''I was pleased the Minister for Health and Social care Eluned Morgan MS, agreed that much more is required to be done to support Cancer patients and those waiting for treatment''