Monty gets visit from Monty AM 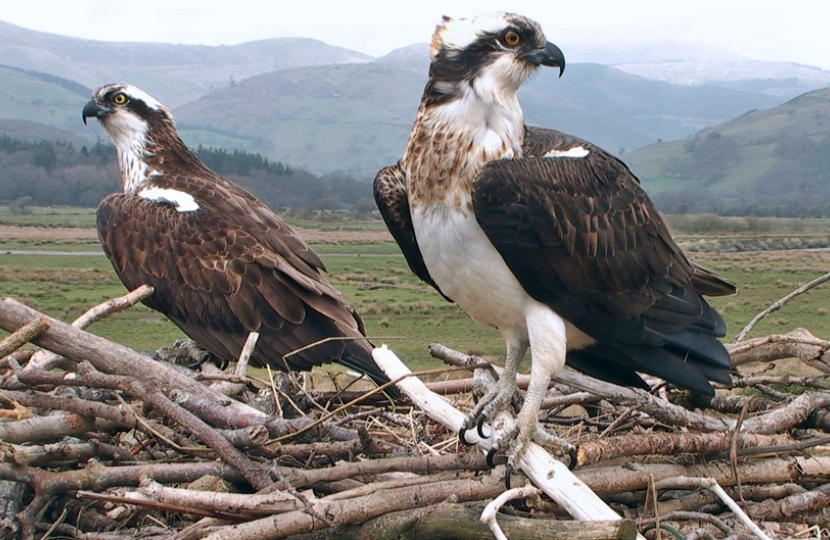 Monty, "arguably the most famous and loved Osprey in the world" has received a visit from local Assembly Member, Russell George.

This week (Tuesday 6th August), Mr George, AM for Montgomeryshire, visited the Dyfi Ospreys Project, an internationally renowned project which is one of the leading osprey conservation, engagement and research projects in the world.

Since 2008, visitor numbers have increased from around 2,000 a year to approximately 40,000 today and millions more around the world watch their live streaming and social media.

Last year, the Trust was successful in its application to the Heritage Lottery Fund to develop a brand new visitor centre at Cors Dyfi which will bring all the current amenities – the toilets, the café and seating areas, interpretation and osprey screens, the shop and volunteer areas all into one new building - the Dyfi Wildlife Centre, which will open in 2020.

"I was delighted to pay another visit to the Dyfi Ospreys Project at the Cors Dyfi Nature Reserve, near Machynlleth, to see how Monty the Osprey and his new family are getting on.

"He has a laid-back character and is seldom agitated so it is always a pleasure to visit Monty. Whenever I visit, I am always struck by the dedication of the team of staff which run one of Montgomeryshire Wildlife Trust's flagship projects.

"I wish the team well as they prepare for closing the Dyfi Osprey Project on the 30th August so that they can start work on the new Dyfi Wildlife Centre and look forward to returning to the new centre when it opens next year.

"The new centre will undoubtedly be a great asset to the Wildlife Trust and further contribute to the Trust's existing record of encouraging people of all ages to learn more about these fantastic rare birds, biodiversity and nature conservation; supporting the wider tourism industry; and boosting the local economy."