Broadband Summit to be held in Montgomeryshire 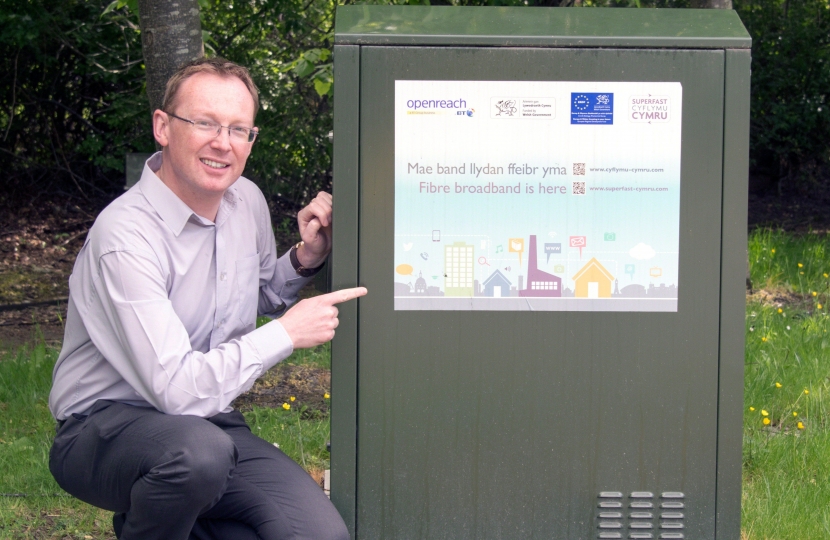 A Broadband Summit, hosted by Montgomeryshire AM, Russell George, will be held on Monday 20th March 2017.

Mr George, who has long campaigned for improved broadband coverage in North Powys, will host the Summit at which community leaders and representatives from across Montgomeryshire will be able to question the Welsh Government’s Minister for Skills & Science, Julie James AM, who has overall responsibility for the Superfast Cymru fibre broadband scheme.

The Summit follows a recent Inquiry into Broadband and Mobile coverage, held by the National Assembly's Economy, Infrastructure and Skills Committee, a committee which Mr George chairs.

Mrs James has agreed to attend the Montgomeryshire Broadband Summit to address community leaders and answer questions about the Superfast Cymru scheme as well as to discuss plans to improve broadband coverage after the current scheme reaches its conclusion at the end of 2017.

“I’m delighted that the Minister has agreed to attend this important broadband summit which will be an invaluable opportunity for community leaders from across Montgomeryshire to question the Welsh Government on its plans to improve broadband coverage in North Powys.

“It remains a significant concern to me that many rural communities across Montgomeryshire appear to be excluded from the fibre broadband upgrade or, at the very least, are at the back of the queue when it comes to receiving superfast speeds.

“While the Superfast Cymru project has undoubtedly improved the availability of fibre broadband across Wales benefitting both residents and businesses, there are many areas of Montgomeryshire which still find themselves with inadequate broadband with only two thirds of premises able to receive superfast speeds.

“The reality is that we, in North Powys, are some way off from receiving universal access to next generation broadband. The goalposts have been repeatedly moved and businesses have been unable to plan for the future.

“This Summit will be an opportunity for us to question the Welsh Government Minister who has overall responsibility for telecoms infrastructure and for us to press her to bring forward a concrete timescale for the extension of superfast broadband to every property in Mid Wales.

“Whether connecting with family and friends, helping children to study from home, or driving growth for local businesses, digital connectivity is now critical to our day-to-day lives and the wider economy.

“As a result, Montgomeryshire can no longer afford to be the poor relation when it comes to fibre broadband.”

Attendance of the Montgomeryshire Broadband Summit is by application only. Please contact the office of Russell George AM on 01686 610887 for further information.

Members of the press who would like to attend the Montgomeryshire Broadband Summit should contact Alex Williams on 0300 200 7206.