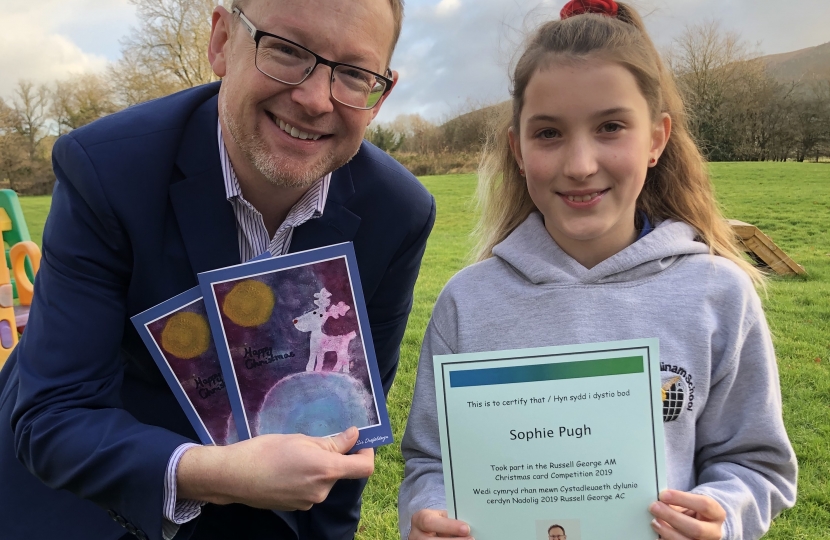 The children of Montgomeryshire have been thanked by a local AM for taking part in a competition to design the official picture, depicting a Christmas scene, which would be carried on the front of the Christmas cards sent out this year by Montgomeryshire AM, Russell George.

Mr George received hundreds of pictures from children all over Montgomeryshire, who were keen to impress him with their artistic skills and creativity.

The AM established a judging panel to assist him in the very difficult selection process but an overall winner finally emerged and the competition was won by Sophie Pugh, from Llandinam School,

“I would like to thank Sophie Pugh from Llandinam School for designing my Christmas card.

“This is the 9th year that I have run my Christmas card competition and the standard of entries was again very high indeed.

“The competition was open to all primary schools in Montgomeryshire, and this is the second time in recent years that a pupil from Llandinam School has won the competition.

“The hand-drawn card shows a reindeer looking up at the moon, and I thought this captured the spirt of Christmas.

“Sophie’s winning entry will now be used as my official Christmas card which I will send out to individuals and organisations across Wales.

“I would like to thank all the children who took part and wish everyone a Merry Christmas.”