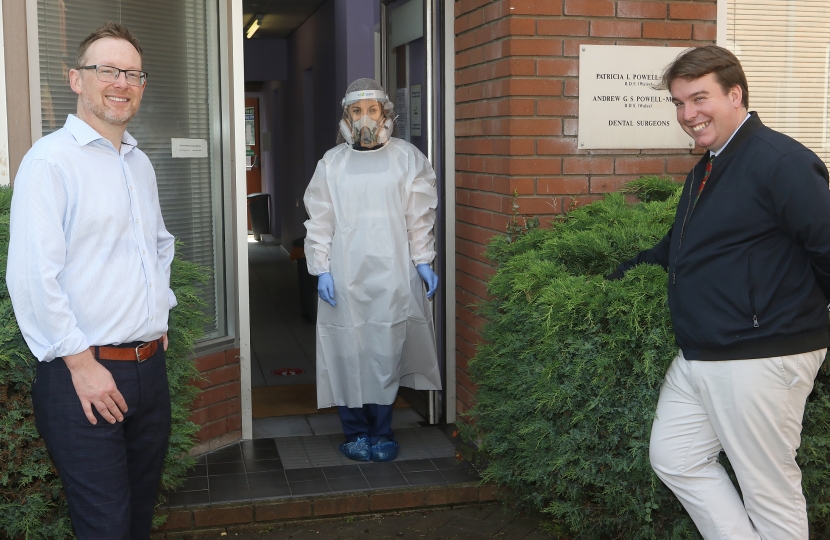 Speculation that the Welsh Government will announce a national 'circuit breaker' has been criticised by local politicians, Russell George MS and Craig Williams MP.

The Member of the Welsh Parliament and Member of Parliament for Montgomeryshire have both said that they will be disappointed if the First Minister takes the decision to introduce a time limited national lockdown for the whole of Wales, describing it as "disproportionate and damaging" to rural Mid Wales which has a comparably low rate of Covid-19 infection compared with areas in urban areas of South Wales.

"For me, it is clear that a blanket national "circuit breaker" to combat Coronavirus, such as the one that the Welsh Government may introduce on Monday will be disproportionate and damaging to the people of Powys' lives and livelihoods.

"The health and the economy of our nation are intertwined and while safeguarding the health of those who are particularly vulnerable to this terrible virus is an absolute priority, measures have to be proportionate to the risk.

"Any national lockdown would unnecessarily penalise the people of Powys from seeing their families and loved ones which would in turn have a detrimental effect on people's health.

"It will also prevent businesses, especially in the tourism and hospitality sector, from recovering from a disappointing summer season so it is vital that the Welsh Government’s decisions to implement so-called "circuit breakers" are proportionate to the threat and minimise damage to any hopes of economic recovery.

"An urban solution which may be suitable for South Wales isn't right for rural Mid Wales. Where we have had cases in Powys, these have been dealt with quickly by Powys Teaching Health Board and this is how we are going to beat this virus - smart, hyper-local lockdowns to reduce the spread of COVID-19 whilst minimising the economic and social impact of restrictions.

"I believe that the earlier introduction of targeted, hyper-local lockdowns would have prevented the need for this kind of damaging national circuit breaker, helping to ensure proportionality in the response to local outbreaks as well as reducing the risk of clusters spreading to other parts of Wales."

"The First Minister has previously stated that hyper-local restrictions would be ‘’a very sensible approach’’, so the introduction of a national circuit breaker will just smack of playing politics with this pandemic, just so that Mark Drakeford can demonstrate that he is being different from the approach which has been adopted by Boris Johnson and the UK Government. This just adds to the confusion.

"As a result of the tiered and risk-based approach which the Prime Minister has introduced which is proportionate to the rate of infection in specific regions of England, the Welsh Government has announced a national 'circuit breaker' regardless of the risk.

"The people of Mid Wales have bent over backwards to ensure that the rate of infection is as low as possible which is why Russell and I are calling on the Welsh Government to protect lives and livelihoods by having a laser-like focus on those areas that require intervention as opposed to its current blanket approach.

"This will allow the Mid Wales economy to still function while ensuring that transmission does not spiral out of control - a more sustainable and effective way of tackling outbreaks whilst simultaneously helping the wider local area to recover socially and economically."