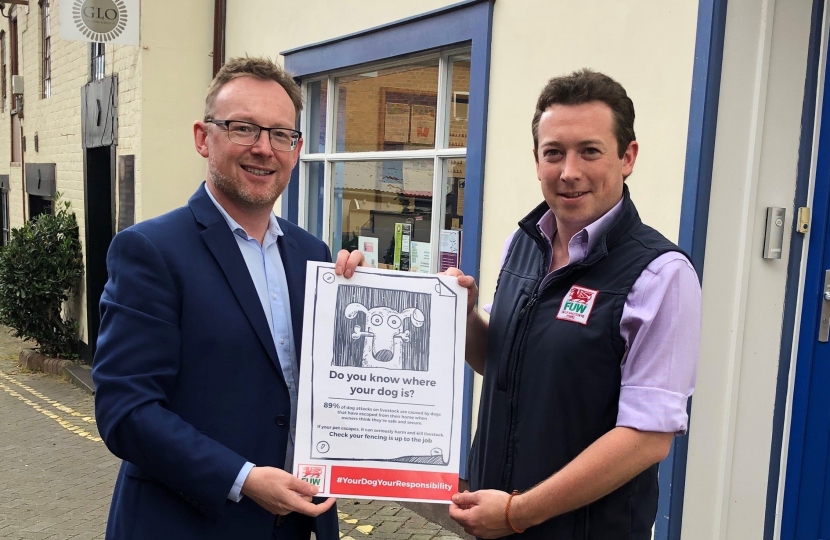 Positive talks on a range of farming matters have taken place between the Montgomeryshire branch of the Farmers’ Union of Wales and local AM for Montgomeryshire, Russell George.

Top of the agenda were farm thefts, livestock worrying, the introduction of Nitrate Vulnerable Zones in the county, as well as the future of farming in light of Brexit.

Speaking after the meeting, the Assembly Member for Montgomeryshire, Mr George said:

“I was pleased to have such a positive meeting with Emyr Wyn Davies from the Montgomeryshire branch of the Farmers’ Union of Wales to discuss a range of farming matters including the introduction of Nitrate Vulnerable Zones and their campaign to minimise dog attacks on livestock.

“On Nitrate Vulnerable Zones, I believe that it is very disappointing that the Welsh Government is still considering expanding the number of NVZ designations, ignoring the advice put forward by the expert sub-group following a year-long consultation on this matter.

“Farmers are already facing excessive levels of red tape and so the introduction of NVZs across the whole of Wales is wholly unreasonable and unnecessary so I will be taking the matter up again with the Welsh Government.

“Emyr outlined that 89% of dog attacks are simply caused by dogs which have escaped from their home when their owners think that they are safe and secure. I was pleased to agree to help promote the campaign. This summer, I would encourage everyone to ensure that their fencing is up to the job of keeping pets safe and in turn keep livestock safe too.”

“We had a really good meeting with Russell George and discussed the most critical farming matters.

“Our members are feeling increasingly stressed. An increase in farm thefts, livestock attacks and the continued uncertainty for the future of our sector, are all things that play on farmers minds.

“As managers of around 80 percent of Wales’ landmass, farmers also play an invaluable part in managing and preserving a landscape which provides clean drinking water for millions, is diverse in habitat and species and includes more than 1,000 Sites of Special Scientific Interest (SSSIs).

“All of this will be placed in jeopardy if our Governments fail us.”