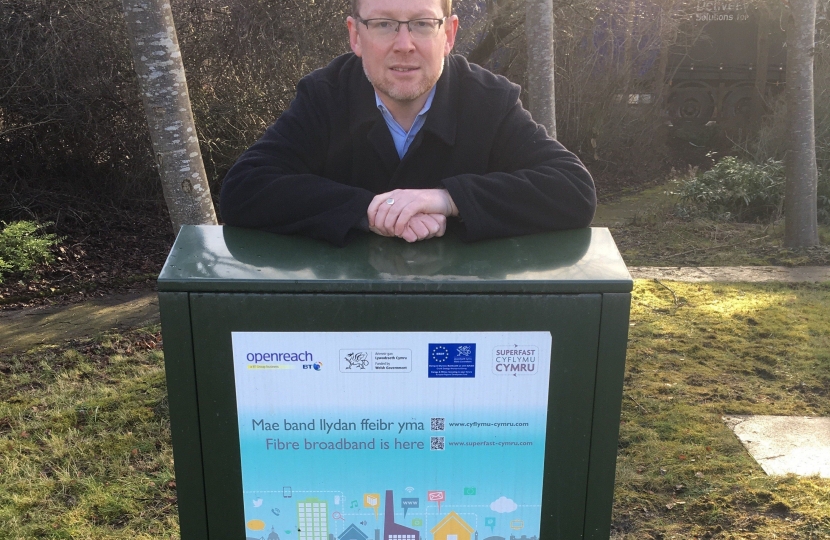 The Welsh Government has finally awarded the contract for the next phase of the Superfast Cymru project to bring faster broadband to premises in Montgomeryshire.

The final lot under the successor project to Superfast Cymru for east Wales has been awarded to Openreach and will provide faster broadband for around 10,000 extra premises in east Wales which will cover Powys, Cardiff; Flintshire; Monmouthshire; Newport; the Vale of Glamorgan; and Wrexham. It will be underpinned by over £9.2 million of public funding and will be completed by March 2021.

"It is right to say that Superfast Cymru has delivered fibre broadband to those who would have never received it without public intervention. Indeed, it's fantastic news that 27% of premises in rural Montgomeryshire can receive "fibre to the premises" which delivers ultra-fast broadband speeds directly to people's homes and businesses.

"However, the digital divide between the "haves" and the "have nots" has widened, and since February 2018 when phase 1 concluded, the rollout of fibre broadband to the significant minority of premises which remain left in the lurch has totally ground to a halt as we have eagerly awaited the award and implementation of phase 2.

“I have continually argued that there should have been a seamless transition between phase one and two of the scheme but almost a year has gone by which has added to the frustration of people who remain without any broadband at all, not alone high speed broadband.

“We are still yet to know what "unforeseen complexities" have contributed to the delay in commissioning this contract and questions still remain, including exactly how many premises in Montgomeryshire are going to be provided with fibre broadband, what type of connections will be used for the rollout, what timescale will they be working to and how many premises will remain stranded and without high speed broadband after phase 2 concludes.

“Broadband is now considered the fourth utility, is an essential part of modern life and is no longer a "nice to have" luxury. It is also essential for a thriving Mid Wales economy so from my perspective, I will keep asking probing questions of the Welsh Government and Openreach until such time as all people in Montgomeryshire are able to benefit from the same high speed broadband which is enjoyed and taken for granted by people in more urban areas of Wales.”

Residents can find out whether or not they are included in the rollout of phase 2 of the Superfast Cymru programme by visiting the online checker at the following website: https://beta.gov.wales/go-superfast/what-are-my-options