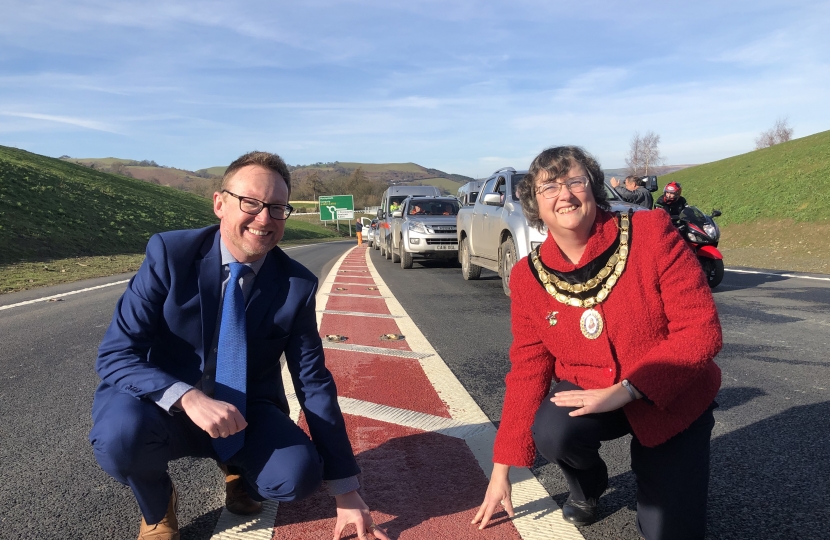 The one year anniversary of the opening of the Newtown Bypass has been celebrated.

After a 70 year wait since the bypass was first mooted, the Newtown bypass was opened on 14th February 2019, marking a momentous occasion for Mid Wales.

During the past 7 decades, the bypass has been on and off the agenda at various points in time. The campaign for a bypass originally began in the 1940s. More recently, in March 2011, 30 people from Montgomeryshire joined Russell George in submitting a 10,000 strong petition to the National Assembly for Wales.

Both Russell George AM and Craig Williams MP are now promoting further progress on other important transport schemes such the construction of the new Dyfi Bridge at Machynlleth, a Pant-Llanymynech Bypass, the dualling of road sections at Llangurig and Llanidloes along with improvements at Moat Lane Crossing near Caersws.

Commenting on the occasion of the one year anniversary of the bypass, Montgomeryshire Assembly Member, Russell George said:

“People from Newtown and across Mid Wales have applauded the way in which the bypass has had a positive impact on Newtown and the wider area, not only in easing the congestion issues which plagued the town, but in stimulating the Mid Wales economy and contributing to traffic improvements in and around the town.

“There has been widespread support for the bypass from the local community and there is already anecdotal evidence that it has begun to have a role in transforming the economies of not only Newtown but our other major towns such as Llanidloes and Machynlleth.

“I am aware of businesses who are preparing expansion plans as a result of the bypass and while there have been isolated teething problems and a few safety concerns which have been brought to my attention over the last year, there has been almost universal support for a project which took 70 years to become a reality.

“The Newtown bypass has made a significant improvement to the Mid Wales economy, and I believe we now have to turn our attention to other infrastructure projects such as the Pant-Llanymynech Bypass. I welcome the commitment by the UK Government that they will deliver a Pant-Llanymynech Bypass and an ambitious Growth Deal to improve transport networks and boost economic growth across the Welsh border.”