Newtown Traffic Study is a ‘whitewash’, says Russell George AM 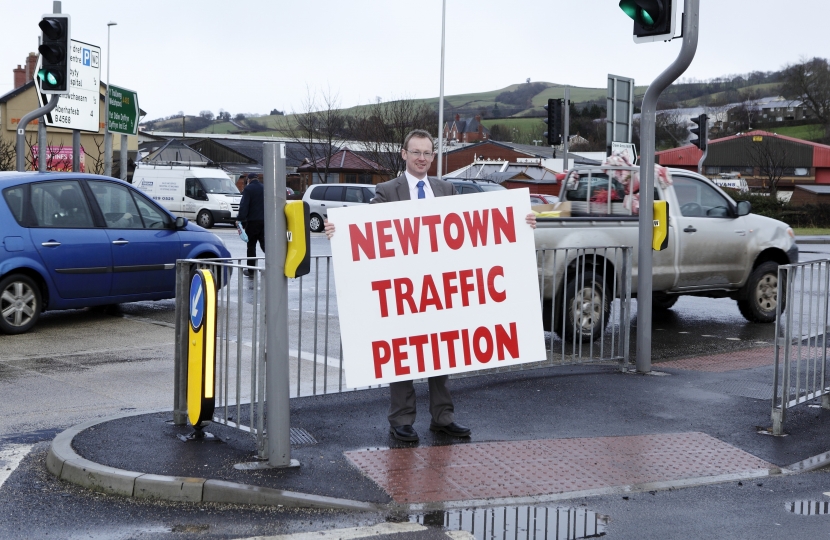 Montgomeryshire Assembly Member, Russell George, has described the publication of a Welsh Government report into Newtown traffic issues as a total ‘whitewash’.

The comments came after the long awaited report commissioned by the Welsh Transport Minister, was finally made public. The report found that the initial traffic signal control system was poorly calibrated when it was set up, which lead to significant congestion, increased delays and public complaints. However, it states that minor junction improvements and signal configuration have improved journey times compared to the former roundabout and that a final minor configuration, which is currently underway, will improve the situation still further.

The report concluded that while the Newtown Bypass will provide significant relief to the road, the current arrangement is the best that can be achieved with the current road layout and that any further capacity improvements, would require third party land or property. Commenting, Mr George said:

“It has taken a long time from organising the Newtown Traffic Petition at the start of last year to get to this point and quite frankly the report is a whitewash.

“I’m very disappointed by the conclusions because it bears no truth to the reality of the situation.

“While I do welcome the Government’s admission that initial traffic control measures had not worked, to say there has been an improvement since the system was rectified is quite extraordinary.

“When I met with the Transport Minister in January, he did commit himself to visiting Newtown to meet with businesses that have been affected. I will be taking the Minister up on this pledge because I feel that only seeing the queues and listening to concerns first-hand, will he truly appreciate that allowing the status quo to continue is not an option.”

"It is good news that we have secured the By-pass but we now need urgent short term measures. The Welsh Government seems totally out of touch with what residents and business in and around Newtown have had to put up with.

“I will be examining this report in more detail and I will be writing to the Minister to ascertain what methodology was used and how calculations were made to arrive at these final conclusions.

Newtown Llanwchaian North Councillor, Frank Torrens, said he was amazed by the report’s findings. He added:

“The capacity of the network has certainly not increased and journey times have not improved; you just need to ask commuters using the A483 on a daily basis to tell you that is fact.

“Government consultants have admitted there are more people using rat-runs in and around the town, which is of course going to affect the figures, as well as those who are now avoiding the town completely because they know how bad the traffic situation is.

“I am amazed by the report’s findings and I think the residents of Newtown will be too.”