Please find below my latest newsletter. I hope you are enjoying the current spell of nice weather.

I recently led a debate in the National Assembly on the Welsh economy, 20 years after devolution. I have written an article on this subject and if you would like to read it, please click here

As always, if you have any questions about the contents of this newsletter or any issues which may not be mentioned here, please don't hesitate to contact me by email: russell.george@assembly.wales or by phoning my office on 01686 610887. 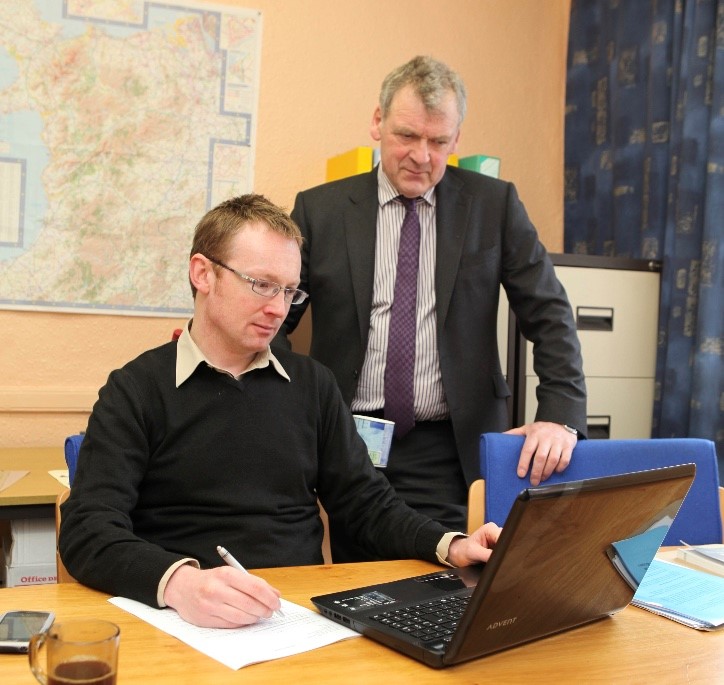 Russell George with newly elected MP, Glyn Davies, back in 2010

Thank you to Glyn Davies MP

It has been a great pleasure working alongside Glyn Davies as Montgomeryshire's Member of Parliament over the best part of a decade. This picture (above) of Glyn and me was taken just before I was elected to the National Assembly for Wales in 2011, and when I was a little more fresh faced!

Glyn has announced that he will not contest the next General Election, after representing Montgomeryshire in Parliament since 2010. Among his many achievements as an MP, he has successfully fought to ensure that robust A&E services remain at Shrewsbury and I'm pleased to have worked with him on a range of healthcare issues in particular. Glyn has also played a major role in promoting and protecting Wales’ interests through his work as a Parliamentary Private Secretary to two Secretaries of State for Wales.

Regular readers of my monthly emails will know that my newsletters focus more on matters which are devolved and are directly the responsibility of the National Assembly for Wales but, as our MP, Glyn has clearly been more heavily involved in all matters surrounding Brexit, and if I don't get a chance to speak to Glyn for a few days, I can be sure of receiving an update on all matters Brexit via his Facebook page and the regular updates which Glyn provides.

I have informed Ruth Canning, the Chairperson of the Montgomeryshire Conservative Association, some time ago that I would like to stand for the next Welsh Assembly Elections in 2021. With more powers coming to our Welsh Parliament, including tax varying powers, I would like to keep ensuring that Montgomeryshire's voice is heard loud and clear in Cardiff Bay.

I know that Glyn shares my view that it is a great honour and privilege to represent Montgomeryshire and for the remainder of his and my time in office, I shall continue to work closely with him to do all we both can to help constituents who come to us for help and advice. My local party will now start a selection process, and I very much look forward to working with the person selected, and our next MP, whoever that person is.

In previous editions of my newsletter, I reported that the Robert Jones Agnes Hunt (RJAH) NHS Trust took the decision to close its Chronic Pain Service last year.

The Trust wrote to patients in December 2018, including those patients from Powys who were receiving care at the hospital, and undertook to contact them again by the 31st March 2019.

However, this did not happen in all cases and it is disappointing that some patients were left unclear as to how their health provision would be met in future.

I have had a number of conversations with the CEO of the Health board, to ask that services are expanded to offer more face to face clinics in North Powys so that more patients can be treated as close to home as possible. The health board have confirmed to me that arrangements are in place so that the PTHB Pain Management Service can secure services for the small number of patients whose needs cannot be met in county. 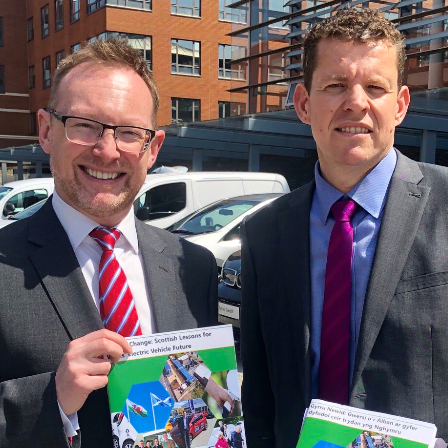 Russell George AM and Rhun ap Iorwerth AM at an event at the Senedd which learned about Scottish Lessons for Wales' Electirc Vehicle Future...

A couple of weeks ago, I hosted an event in Newtown which brought together local people including councillors, officers from Powys County Council and representatives from the Welsh Government to discuss opportunities to progress the growing need to increase the network of charging points for electric vehicles in Mid Wales. I'm pleased that we had the opportunity of coming together to share ideas and discuss the issue of the growing need for electric charging points across Montgomeryshire.

The emerging themes in the Committee's inquiry show that all parts of Wales, but particularly rural areas of Mid Wales, could benefit greatly from increased electric car use, but that this would require significant changes to the current power and road infrastructure. Some have suggested that Mid Wales is a "charging desert" and that the current infrastructure is insufficient in coping with existing demand not alone increased demand in the future.

Therefore, assessing the gaps in the infrastructure and resolving these underlying issues will be essential if we are to eliminate barriers including range anxiety when potential users worry about their ability to complete a full journey and encourage a significant increase in electric vehicle usage in the future.

I was pleased that the conclusions from the event endorsed my view that it is vital that the needs of rural Wales are not overlooked as electric vehicles become more common-place. 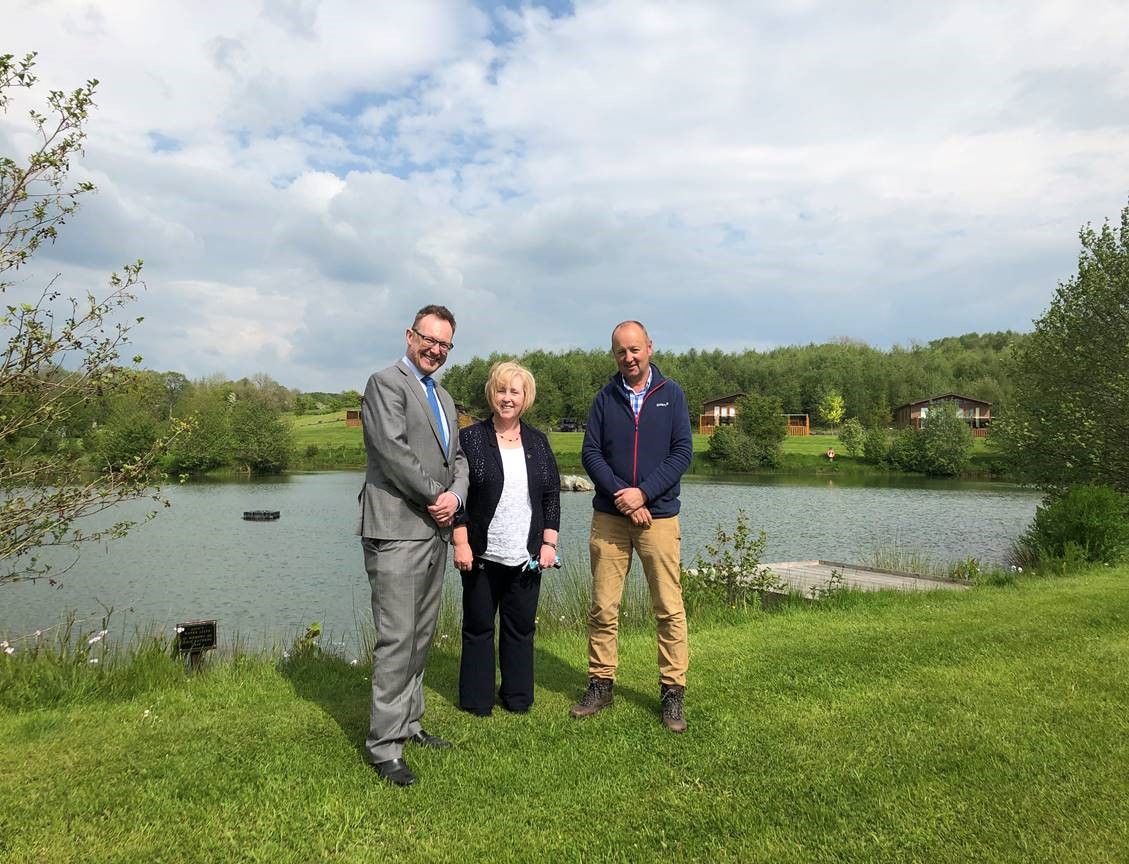 Wales Tourism Week took place between 11th and 19th May and I took the opportunity of visiting Abermule Caravan Park and Dolgead Hall Caravan and Lodge Park to celebrate the week and promote Mid Wales as a tourist destination. Smithy Park at Abermule has consistently graded 5 stars by Visit Wales and holding a host of environmental awards, Dolgead Hall provides a beautiful environment for holiday home owners to visit and invest in Mid Wales.

In my view, Powys has the potential to be one of the main tourism hubs of the world and has fantastic assets that can place it apart from other countries. Tourism is becoming an increasingly important part of the rural Mid Wales economy throughout the year and Wales Tourism Week is helping to highlight this. More tourists than ever before are visiting Mid Wales to see what our wonderful region has to offer.

Tourism is a critical driver in economic development and job creation in Mid Wales and I want to see the Welsh Government do more to foster the right conditions for growth in this crucial sector for the Mid Wales economy by ensuring that the Mid Wales tourism industry is firmly plugged in to the emerging Mid Wales Growth Deal.

That is why I believe that it is vital that a tourism tax is not introduced in Wales, whether at a Welsh Government or local authority level. Otherwise, we might as well surrender our chances of being a global tourist attraction.

We have heard first-hand from businesses that rely on tourism – mainly small and often family-run – that such a tax would impose constraints on them and reduce their competitiveness.

Over a number of years, school governors in particular have contacted me regarding the financial challenges which face our schools. A couple of weeks ago, I was pleased to meet with the governors and senior leadership team of Welshpool High School, along with my Assembly colleague and Shadow Minister for Education, Suzy Davies.

During the roundtable discussion which ensued, we heard of the acute challenges which the education system in Powys is facing and we had the chance to explore those challenges locally and nationally.

One radical new policy approach which the Welsh Conservative group has put forward is to scrap the Welsh Baccalaureate to give more school hours back to pupils and teachers. Pupils and students have repeatedly expressed concerns over the time taken from the school day to focus on the Bacc, and the added pressure that puts on them and their teachers.

So, while the aims of the Welsh Baccalaureate are good in principle, they will be more than achieved by the new curriculum. We can’t keep increasing pressure on our young people and teachers to invest more and more time creating duplicated work, which might not even help them gain further education or employment because it is so little understood.

According to the NASUWT Teachers’ Union, pupils in Wales receive £645 less per head than those in England. Schools are being assigned a ‘totally inadequate level of funding’ and concerns have also been raised over a non-transparent system that sees £450 million of education funding never reach the classroom. We also see some schools, especially in rural areas, miss out on vital funding purely because of their location. This has been described as "a severe funding crisis" and any move to directly fund schools; remove significant layers of bureaucracy; and alleviate the pressure on schools and teachers should be welcomed so that more money gets into the classroom and to learners. 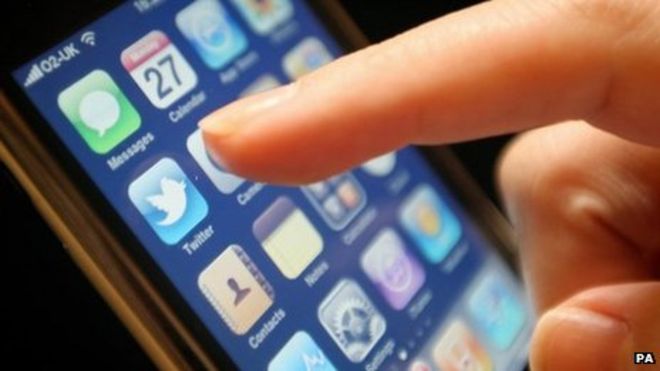 You may be aware of my previous lobbying of the industry and government into addressing rural mobile not spots. In some positive news, the Chief Executives of Britain’s four mobile phone networks have agreed to form a new company to help boost 4G coverage in rural areas.

They intend to allow access to each other’s masts on a reciprocal basis to improve competition in rural areas and they also propose to set up a new company, overseen by the UK Government and Ofcom, the telecoms' regulator, to allocate funds for the construction of new masts to eradicate “not spots”, where there is no service from any operator.

I'm encouraged to see mobile companies working together on proposals to improve coverage but the industry has also proposed that the installation of new masts is demand-led, putting the onus on local communities and authorities to request a new mast so it will be important for those who want improved coverage to actively lobby me and the mobile network operators directly which will help speed up the installation of new masts in appropriate locations.

I will be in the following areas, and available to meet with people. Please contact me if you would like to meet by phoning 01686 610887 or emailing russell.george@assembly.wales