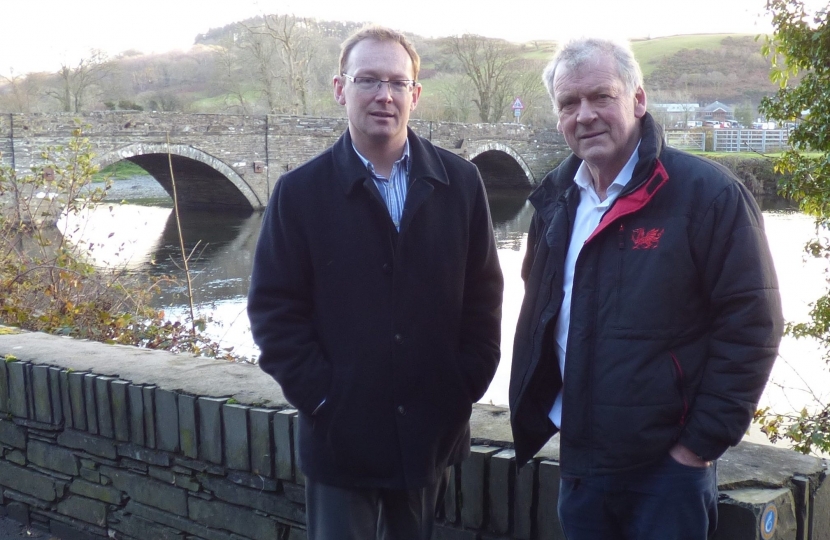 Montgomeryshire’s political representatives, Russell George AM & Craig Williams MP, have welcomed plans to build a new Dyfi bridge on the A487 north of Machynlleth.

The Welsh Government have this week (Monday 13th January) announced that plans to replace the 200-year-old Dyfi bridge have been the go-ahead. The bridge has been subject to constant closures over many years due to flooding and collisions, often forcing residents and motorists to endure a 20-mile plus detour when closures are in place.

The project includes the construction of a new viaduct across a wider floodplain, as well as a river bridge. The original stone bridge will also remain in place, with the Welsh Government expecting completion of the project by summer 2022.

“The Dyfi Bridge was never designed to carry the current volume of traffic. The road is also often closed due to frequent flooding, causing traffic to take a diversion of up to 30 miles. The bridge was closed yet again in the Autumn so it has been imperative that this pinch point is resolved.

“I have questioned the Welsh Government Minister for Transport, Ken Skates, a number of times during 2019 on when he would be in a position to make a decision on the project and he had informed me that the Dyfi Bridge project has seen a number of changes to its scope in the development phase. As a result, he had required a revision of the final costs before being able to make a decision.

“I am delighted that this replacement bridge has now finally been given the go ahead.”

“This is great news for the residents of Machynlleth, and indeed Mid Wales as a whole. The A487 is a key Trunk Road which links Gwynedd, Powys, Ceredigion and Pembrokeshire, and improvements to the route’s reliability, safety and traffic flow will provide a massive boost to the area’s economy and tourism industry.

“It’s been a long time coming – talks about improving the bridge have been ongoing since 2015 – but I’m really pleased that a new Dyfi bridge has finally been given the green light, which will greatly benefit many communities across Mid Wales.”