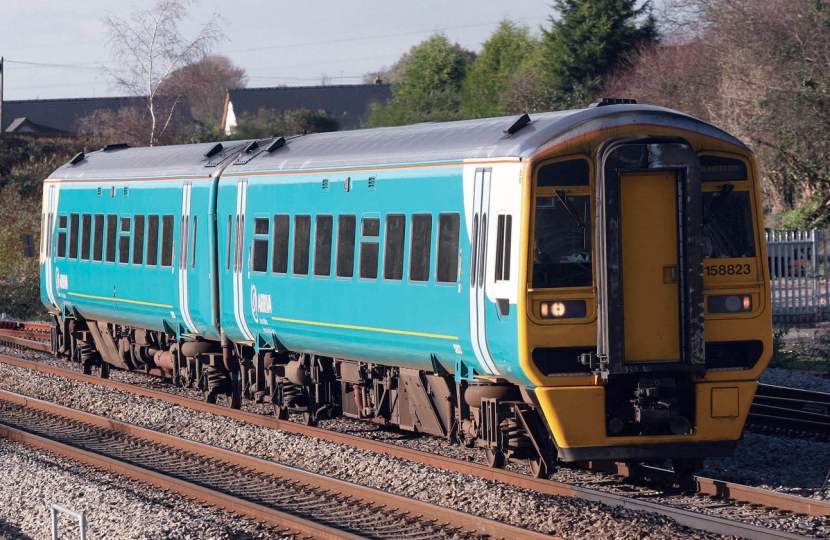 Montgomeryshire Assembly Member, Russell George, has welcomed Arriva Trains Wales announcement of increased capacity on its Wales and Boarders service but has stated that an hourly service on the Cambrian Line was ‘vital’ to accommodate commuter demand.

Arriva Trains Wales has announced that over a third of a million extra seats will be introduced through a timetable change on 14th May, which will provide increased capacity on its most popular routes in Wales and along the English boarder. It says it is increasing the number of carriages and seats available on trains as well as providing new and extended services as a response to ‘continued growth in passenger numbers.’ The train operator says it has been able to do this through ‘increasingly smart use’ of the limited number of trains allocated to the franchise.

“I do welcome the news that Arriva Trains Wales (ATW) is increasing capacity on its routes using the Cambrian Line.

“I have written to ATW on a number of occasions highlighting complaints from constituents who have told me that due to carriage reductions on services from Shrewsbury to Aberystwyth, there have been several instances of severe overcrowding.

“Passenger safety must be a priority for the operator and I am pleased that it has taken my and its service users concerns, seriously.

“However, in the long-term, we still need that hourly service on the Cambrian Line not just to accommodate commuter demand but also fordelivering economic growth that Mid Wales desperately needs.

“The service is a key commitment in the Welsh Government’s National Transport Plan which should, according to its own project timetable, have been delivered by now.

“It needs to stop dithering and get on and do it.”

Newtown County Councillor, Frank Torrens, has also welcomed the positive steps taken by Arriva Trains Wales but said the rescheduling of services was the ‘perfect opportunity’ to introduce the hourly service. He added:

“If Arriva Trains Wales is going through an exercise of service rescheduling, then it should be looking to introduce now the hourly service from Shrewsbury to Aberystwyth.

"This is something that I have been lobbying on for some time now and I still don’t understand why ATW and the Welsh Government are dragging its feet over the issue.

“Business and passenger groups desperately want this service as soon as possible and ATW must deliver.”