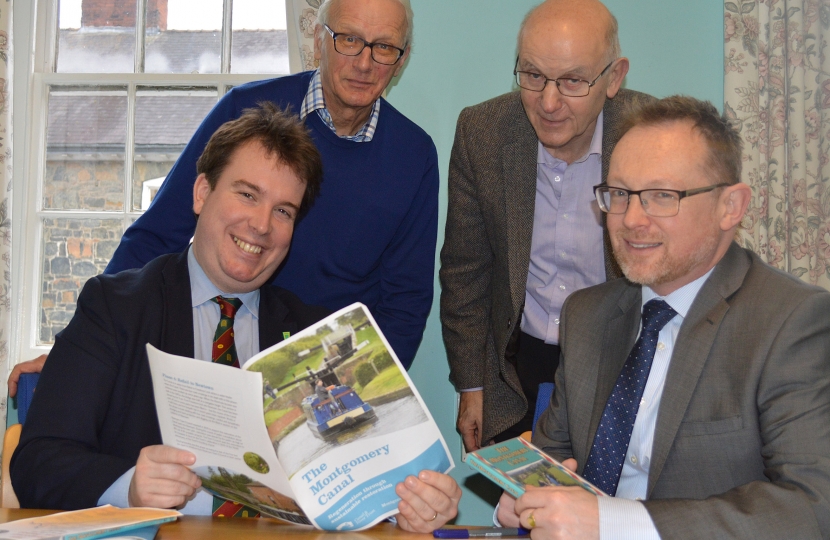 Montgomeryshire politicians, Russell George AM and Craig Williams MP have reiterated their full support for the restoration of the Montgomery Canal.

The local AM and MP for Montgomeryshire have once again supported a bid by the Montgomery Canal Partnership for the canal restoration to be included in the projects supported by the Mid Wales Growth Deal.

The UK Government has pledged an initial £55 million for the Growth Deal and it’s hoped the Welsh Government will match that amount.

Mr George and Mr Williams will liaise with Powys and Ceredigion County Councils about progress with the Growth Deal.

Mr George pledged to arrange an event and debate at the Senedd to make fellow AMs aware of the importance of the canal restoration to tourism and the economy of Montgomeryshire.

Mr Williams also pledged to arrange a meeting with Welsh Secretary Simon Hart and Parliamentary Under-Secretary of State for Wales David Davies in London and to sponsor a Westminster debate about the canal restoration.

“Tourism is such an important part of the Mid Wales economy and it’s crucial to realise the ambition of restoring the Montgomery Canal. I shall continue to champion the restoration.”

“I was delighted to mention the Montgomery Canal in my maiden speech in the House as a top priority for me as MP. I am coming late to the battle, as so much hard work has been done, but I am determined to ensure that the canal reaches Newtown.”

Mr Dodwell estimated that restoring the canal to Newtown would generate an annual visitor spend of £5 million, create 128 full-time jobs and be a catalyst for the regeneration of the Upper Severn Valley corridor.

More than half of canal’s 35 miles have been restored and this year marks the 40th anniversary of the opening of the Prince of Wales section outside Welshpool.

Mr Dodwell said it was hoped to complete the restoration to the town within 10 years before moving on the fourth phase from Garthmyl to Newtown.

He thanked both politicians for their enthusiastic support and advice.

“The series of positive meetings we have held with elected representatives and partner organisations this week has given fresh impetus to the campaign to restore the Montgomery Canal.”