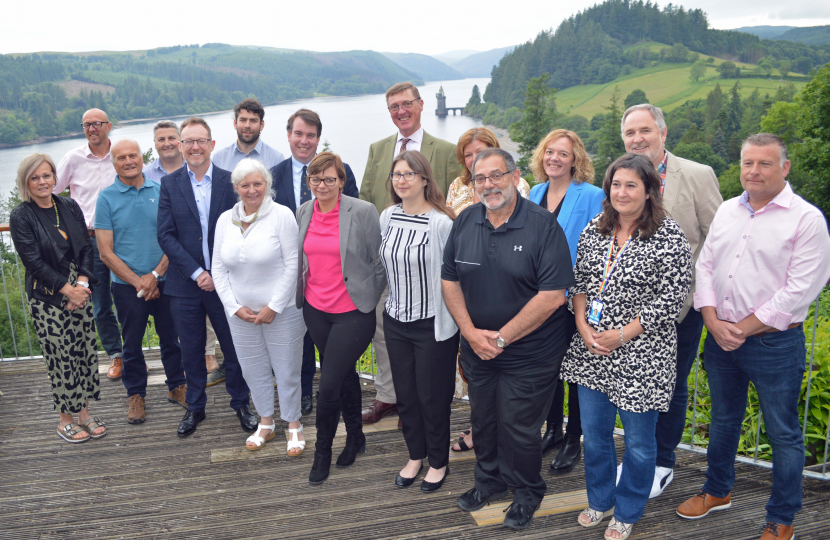 New investments include £4 million at Meadow Springs Country and Leisure Park, Trefeglwys, where a further £1m is to be spent on a 60-metre indoor swimming pool, sauna and gym later this year.

The Centre of Alternative Technology near Machynlleth is proposing a £40m redevelopment project and Dŵr Cymru has plans for a £20m project in the Elan Valley, near Rhayader, both of which are seeking support from the Mid Wales Growth Deal.

Russell George, MS and Craig Williams, MP, who represent Montgomeryshire in the Senedd Cymru and  UK Government respectively, both said they were impressed by the investment planned by the tourism and hospitality businesses.

The meeting, hosted by Lake Vyrnwy Hotel, was organised by MWT Cymru, which represents more than 600 tourism and hospitality businesses across Powys, Ceredigion and Southern Snowdonia.

A dozen invited businesses, all MWT Cymru members, spoke about restriction to services caused by a staff shortage, the negative impact of the Welsh Government’s proposed tourism tax, unfair competition from unregistered Airbnb accommodation and concerns about poor broadband and electricity services.

Businesses were also keen to learn more about the bidding process for the Shared Prosperity Fund, the Levelling Up Fund and the Mid Wales Growth Deal.

Mr George said: “The clear message from the meeting is that the proposed tourism tax is going to be hugely detrimental to the tourism industry and that issues surrounding recruitment in the hospitality industry remain a serious concern.

“There seems to be a mixed picture from visitor attractions in terms of visitor numbers and I have asked MWT Cymru to collate more information for me.

“What is very positive is that we have been able to have our first face to face meeting for three years with MWT Cymru members.”

MWT Cymru’s chief executive Val Hawkins said it was a very positive meeting with Mr George and Mr Williams. “It was fantastic to hear our member business speak about their exciting investment projects which augurs well for the future of tourism in Mid Wales.

“However, there are storm clouds looming with the rise in the cost of living, the Welsh Government’s proposed taxes on the tourism industry and ongoing issues surrounding staff recruitment, broadband speed, electricity supplies and delays in decisions on planning applications in Powys.”

During the meeting, he said the UK Government’s Shared Rural Network programme aimed to boost broadband speeds and mobile signals across Montgomeryshire. He hoped a pioneering local electricity grid could be trialled in the Llanidloes area to overcome supply issues and power new electric car changing points.

“I was hugely impressed to hear about the investment planned by the businesses and to discuss how we can support these great opportunities for tourism in Mid Wales,” said Mr Williams.

“I believe the Shared Prosperity Fund, Levelling Up Fund and the Mid Wales Growth Deal represent a game changing opportunity to put Mid Wales on the map.”

Mr Williams said he wanted partnerships to be developed with English airports, such as Birmingham, to attract more international visitors to Mid Wales. “We need to look at the region much more holistically as a partnership because I want to champion Mid Wales as a prime, world class destination,” he added.