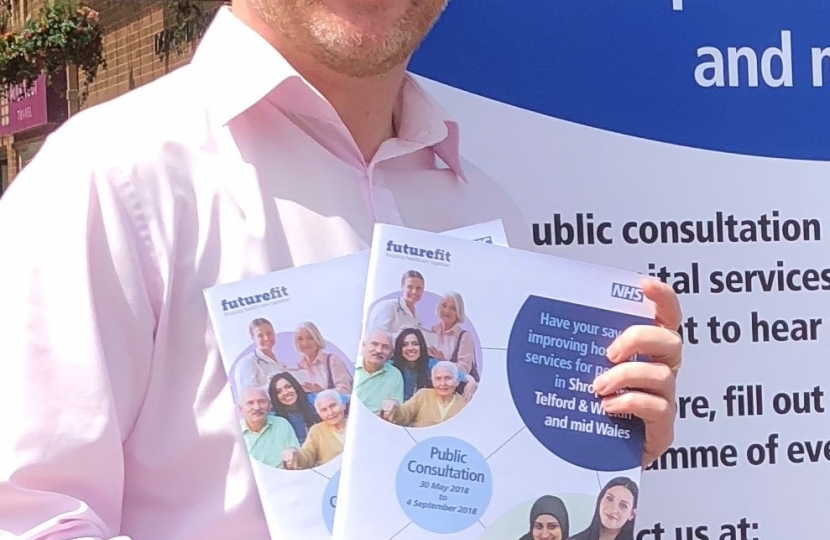 "The long-awaited decision on the future of local hospital services in Shropshire which also serve the people of Mid Wales is imminent and I welcome the publication of this decision making document. It sets out the business case which brings together the work which has been carried out over the last six years by the Future Fit Programme Board as well as the result of the public consultation.

"The people of Montgomeryshire will be watching very closely as the Board makes its final decision on 29th January as residents in Mid Wales are reliant on the services which are provided at the Royal Shrewsbury and the Princess Royal in Telford.

"As I have said previously, there is an overwhelming majority in Montgomeryshire for there to be an emergency care service at the Royal Shrewsbury Hospital rather than the Princess Royal in Telford, but I acknowledge that there are still concerns that this proposed model of care could result in residents having to travel further for some of their planned or elective healthcare.

"Therefore, while I am in support of the preferred option which has been put forward for approval at the meeting on 29th January, I have also expressed the view that, alongside the proposed reconfiguration of services in Shropshire, it is essential that some planned care is delivered locally in our local community hospitals in Llanidloes, Newtown, Welshpool and Machynlleth.

"I await this decision with anticipation and interest and look forward to a final decision being made."

The Joint Committee of Shropshire and Telford & Wrekin CCGs will be held in public at 6.30pm on Tuesday, 29 January 2019 at Harper Adams University, Edgmond, Newport TF10 8NB. The meeting will be live streamed via a webcast that can be accessed at www.nhsfuturefit.org and members of the public are invited to attend. Free parking is available on site. More information can be found at www.nhsfuturefit.org