Highlighting the contribution of the farming community in Wales 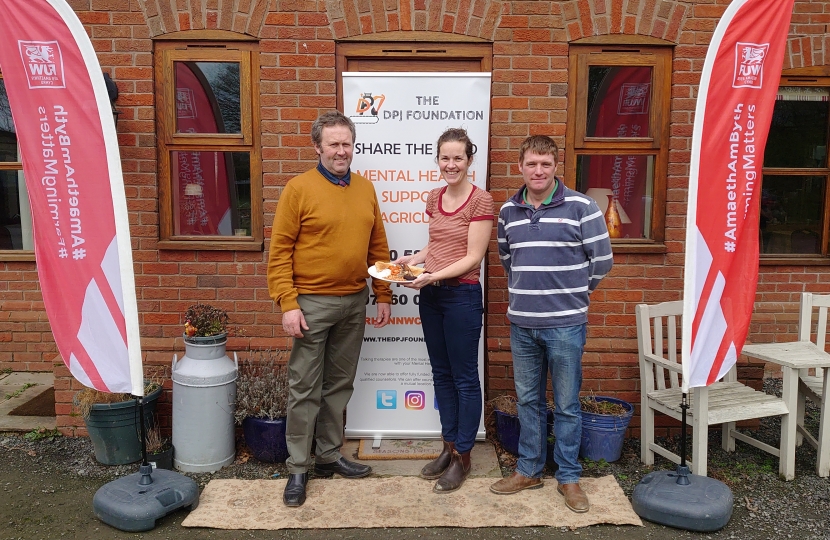 The commitment and contribution of the farming community to Wales and its rural economy has been highlighted by Montgomeryshire Assembly Member, Russell George.

In a series of meetings at the Senedd last week (week commencing 20th January) with farming unions, the NFU and FUW, and a Farmhouse Breakfast in Forden, Mr George has aimed to raise the profile of the issues affecting the agriculture industry as well as celebrating locally produced foods.

Following the meetings with the NFU Welsh Council, the FUW and a Farmhouse Breakfast meeting in his Montgomeryshire constituency, Mr George said:

“There are significant challenges facing the industry, and events like this that bring about informal discussions between farming unions, local farmers and politicians are crucial.

"I would like to thank the NFU and FUW for useful discussions and I would particularly like to thank Mark and Helen Williams for their hospitality in hosting us for a fantastic Farmhouse Breakfast in Forden. It was absolutely delicious!

"All of the meetings are an opportunity to shine a spotlight on the importance of our rural economy and an opportunity to promote the quality premium local produce that Montgomeryshire's farmers produce for us every day of the year.

“There really is no better place for sharing ideas than over good food at the breakfast table and that’s exactly what we were able to do at Penderw in Forden.

"Both the NFU and FUW highlighted Wales’ rich network of how family farms supports and fuels local communities.

"The Welsh Government has a role to play in partnership with the farming community to confront the challenges ahead and seize the new opportunities which will be presented by Brexit.

"I will continue to call on the Welsh Government to provide farmers and rural communities with greater confidence in the Welsh Government's plans contained in their Sustainable Farming and Our Land proposals; to fully recognise the importance of food production in Wales; and acknowledge the role which farmers play in developing the rural economy.​

"As we approach Brexit, there is also an opportunity to reinvigorate our farming community and to produce the food our nation’s larder requires.​ We need a deal that protects vital industries such as agriculture, that are so important for us in Mid Wales, and secures future funding and paves the way for our country to exploit the new opportunities that leaving the EU will offer.​"