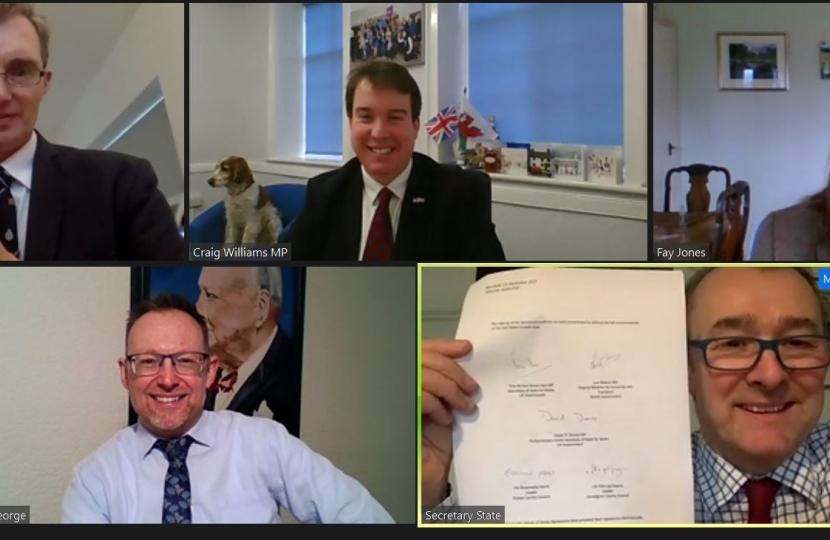 Russell George MS and Craig Williams MP, Welsh Conservative representatives for Montgomeryshire, have welcomed the signing of the Mid Wales Growth Deal as a ‘fantastic day for Mid Wales.’

The partners in the deal will now move on to identifying specific projects to benefit from investment, with 8 strategic growth areas identified. These are:

“I believe it was 2 years ago that the Welsh Government’s Economy, Infrastructure & Skills committee which I chair recommended the Growth Deal for Mid Wales, and there has been a lot of work from many people in ensuring that we reach the point we have reached.

“What is particularly pleasing is that the UK & Welsh Governments have closely worked together on securing this deal, in conjunction with the 2 local authorities.

“I am extremely pleased that we are now one huge step closer to seeing these hugely exciting projects for Montgomeryshire and Mid Wales become a reality.”

“The delivery of the Mid Wales Growth Deal represents a fantastic day for Mid Wales. The deal has been over 3 years in the making, and I am absolutely delighted that the UK Government’s manifesto commitment to delivering this deal and signing off £55million of investment into the region has today become reality. This investment will bring real growth and new opportunities to Montgomeryshire and Mid Wales as a whole.

“Despite the extreme pressures which the Covid-19 pandemic has brought within the last 12 months, I am extremely pleased that the commitment from all sides to ensure this deal was delivered prevailed. I would like to pay tribute to the Secretary of State for Wales Simon Hart and the Minister for Wales David TC Davies for their determination and hard work in securing this investment for Mid Wales, as well as to the Welsh Government and Powys and Ceredigion councils for their commitment.”

“Today marks a really important step forward for Mid Wales. In a year dominated by the Covid-19 pandemic, I think people could be forgiven for wondering whether such agreements would stand the test of time. But the UK Government have always been intent on delivering this deal and have today signed off £55million, which we are happy to see will be matched by the Welsh Government. This represents a hugely significant amount of money for Mid Wales which will be used on areas such as digital infrastructure, transport, agriculture, tourism – all areas which are of huge importance to Mid Wales and will matter even more as we emerge the other side of this pandemic.

“I am very pleased by the positive collaboration between not just the UK and Welsh Governments, but also MPs, MS’s and County Councillors. Today represents the moment where we can say that the Mid Wales Growth Deal is actually going to be delivered.”