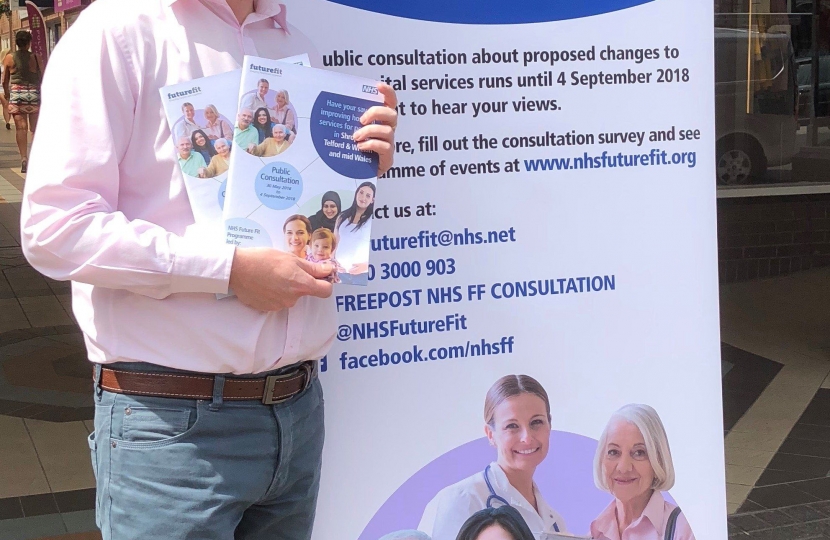 A new Emergency Care centre will be built at the Royal Shrewsbury Hospital with The Princess Royal Hospital in Telford becoming a Planned Care centre, with 24-hour Urgent Care centres at both hospitals.

The decision, which was made yesterday (Tuesday 29th January) at a public meeting by the Joint Committee of Shropshire and Telford & Wrekin Clinical Commissioning Groups (CCGs) has been welcomed by Mid Wales AM, Russell George.

The meeting considered the Decision Making Business Case which brought together all of the work which has been carried out by the "NHS Future Fit" programme over the last six years.

The Shropshire and Telford & Wrekin CCGs consulted the public on two options which were designed to improve the hospital services provided at both the Royal Shrewsbury Hospital and Princess Royal Hospital in Telford to meet the needs of communities across the areas which they serve. This follows an injection of capital funding of £312 million from the UK Government which will now be secured to develop the much needed reform of health services, and build a new state of the art Emergency Care Centre in Shrewsbury.

NHS "Future Fit" asked the public whether they preferred for the Royal Shrewsbury to become an Emergency Care centre and the Princess Royal Hospital a planned care centre (the CCGs' preferred option) or vice-versa.

“This is good news for Mid Wales. I am pleased that the Emergency Care Centre will be located in Shrewsbury, which is centrally located, to serve the life-saving emergency healthcare needs of the wider region and those of us here in Montgomeryshire.

“This long-awaited decision comes after many years of deliberation by the NHS "Future Fit" programme board which considered the outcome and feedback from a public consultation, impact assessments on the different options and the findings of an independent review.

“I’d like to thank the people of Mid Wales who engaged in the public consultation and completed my own survey in relation to this consultation. I received over 600 responses from residents in Montgomeryshire. The overwhelming conclusion was that 95% of respondents preferred an emergency care centre at the Royal Shrewsbury Hospital rather than the Princess Royal in Telford but there were also concerns that under both options, the proposed model of care would result in residents having to travel further for some of their care.

“As a result, I believe that it is essential that some planned care is delivered locally in our local community hospitals in Llanidloes, Newtown, Welshpool and Machynlleth, to prevent the need to travel out of county to see a consultant.

“NHS services should be delivered as close as possible to home and I have previously called on the Welsh Government to allocate additional funding to Powys Teaching Health Board for minor injury units and develop a Community Hospital Development Fund to encourage the innovative use of community hospitals across rural Wales.

"This decision is a milestone which marks the point where the Shrewsbury & Telford Hospitals Trust has begun to confront its challenges and makes the necessary reforms which will allow it to attract top class consultants and clinicians. I am hugely encouraged by this decision, which I hope will allow building works to commence on the Shrewsbury site for a new Emergency Centre next year."