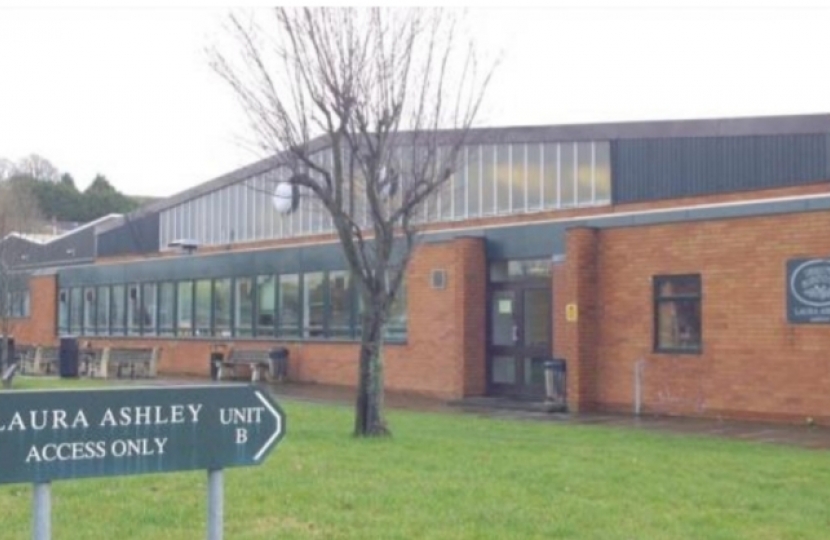 The Assembly Member for Montgomeryshire was one of the few politicians attending this weeks ‘reduced assembly’ session. Political parties had agreed to nominate a small number of AMs to attend, in order to just be above the legal requirement for Emergency legislation to be passed.

After raising the issue with the First Minister in the Senedd on Tuesday (24th March), Mr George said:

“Business in the Assembly was amended, so that only the most pressing issues of dealing with the consequences of the Coronavirus could be discussed and voted on. There was a requirement that at least 10 AMs had to be in attendance to vote on Emergency legislation. But clearly, this is such an important issue for our area, this issue needed to be raised with the First Minister of Wales.

"Laura Ashley has literally been part of the furniture of Montgomeryshire and been an integral part of the Mid Wales economy for the best part of 60 years. News that a company of the size and importance of Laura Ashley to our local community has gone into administration would normally be headline news.

"This news has been somewhat overshadowed by the unprecedented circumstances we all find ourselves in during this Coronavirus outbreak.

"Nevertheless, many families in Newtown and the surrounding area have a family connection or are still employed by Laura Ashley, and I have called on the First Minister and Welsh Government to offer support in finding an alternative buyer and the requisite level of funding to support the company's staff who would be adversely affected by the company's closure during a time of great uncertainty

"I'm pleased that the First Minister joined me in expressing disappointment and offered his concern for the employees of Laura Ashley and that he confirmed that the Welsh Government would be closely involved in finding a viable solution, and would support any new business with the view of keeping the operation in Newtown."

[...] Laura Ashley in my own constituency went into administration last week. Normally, this would be a top headline, but clearly it’s not, it’s dropped down, but, there are between 500 and 600 people that are employed in Newtown and the area. Clearly, many families are employed by Laura Ashley together— the whole family is employed—and I wonder what discussions you may have had with the company. Have you been involved, has the Welsh Government been involved in terms of finding a buyer? And what support will be available for those staff who are affected? Thank you, Presiding Officer.

[...] can I express our real sympathy for those employees of Laura Ashley? As Russell George said, in any other time we would be spending a lot of our time talking about that, and Welsh Government is very closely involved in that situation, particularly in relation to an alternative buyer, and what such a buyer might want to do with that business and how it would affect employment in Newtown, in particular. So, we are focussed on the future and trying to make sure that where there are opportunities for that business to continue in a different form, and under different arrangements, we’ll do our best to support that and to deliver that for the people of that part of Wales.

The Member of the Welsh Parliament for Montgomeryshire - Russell George MS – has welcomed the launch today (September 24) of the Covid-19 app for England and Wales.