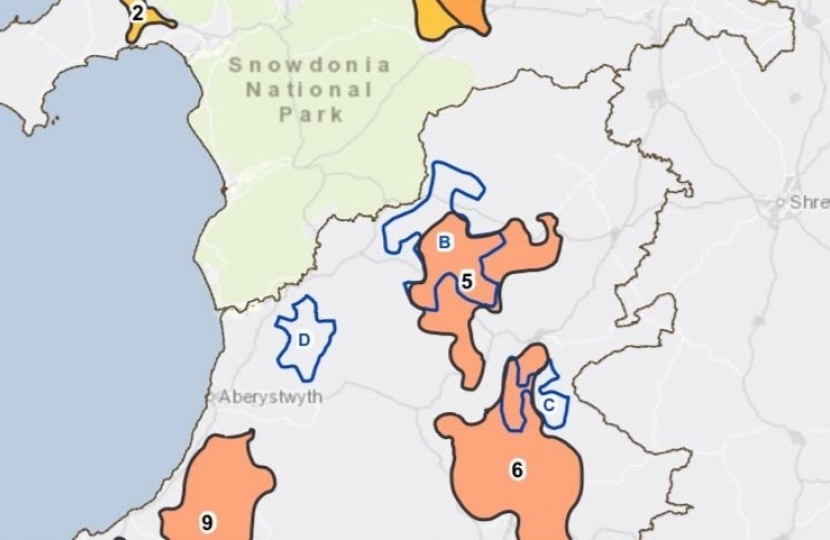 Proposals to make large scale changes to Powys' landscapes has been described as "potentially devastating" by a Powys Assembly Member, Russell George.

Mr George, the AM for Montgomeryshire, who has been a long-time supporter of protecting the Mid Wales landscape has been responding to proposals contained within the Welsh Government's Draft National Development Framework.

The National Development Framework is a new development plan which will set the direction for development in Wales from 2020 to 2040. It sets a strategy for addressing the Welsh Government's national priorities through the planning system.

The draft framework, which was published last week (Wednesday 7th August) contains proposals for "large scale wind development to be directed towards Priority Areas for Wind and Solar Energy". Over a dozen areas have been identified throughout Wales.

According to the document, there will be a presumption in favour of "large scale on-shore wind development in these areas and an acceptance of landscape change."

Also, "a strategic review of landscape and visual impact identified the Priority Areas for Solar and Wind Energy as the most appropriate locations to accommodate landscape change. There is, therefore, an acceptance of landscape change in these areas."

“The proposals contained within this Welsh Government plan will come as no surprise to the people of Mid Wales. We have always known the Welsh Government's desire to trash the Mid Wales' landscapes. The document released this week effectively confirms their ambition.

"In 2011, thousands of people from Mid Wales turned up in Cardiff Bay to protest about the Welsh Government's existing planning guidance, and in their current proposals, it seems as though they are determined to do all they can to ignore the views of Mid Wales people.

"Like thousands of my constituents, I’m passionate about protecting our environment. Whilst on the one hand the document purports to protect our environment, it’s clear the Welsh Government have a different priority for us.

“Although the document is quite clear on the Welsh Government's intention to impose large scale wind development on Mid Wales, it contains no information about how the power generated will be connected to the national grid.

"Local people have seen off a number of attempts to destroy Powys' beautiful countryside with large scale pylon infrastructure, and I have no doubt that local people will resurrect the campaign again to prevent these devastating proposals see the light of day.

"Mid Wales people recognise the importance of tackling climate change by reducing emissions, and we need to invest in renewable technologies, and ensure we have a mixed basket of different forms of renewable energy solutions.

"In my experience, affected communities will not sit back without a fight and accept the Welsh Government's top down assertion that there has to be an "acceptance of landscape change".

"This draft Development Framework includes proposals which would devastate vast swathes of Powys and I would encourage communities to make their views known loud and clear before the consultation closes on November 1st.

"I am also very concerned that the Welsh Government is once again seeking to interfere in the planning priorities of Powys in an attempt to impose large scale wind and solar energy developments on mid Wales communities and by-pass the will of local people.

"The top down nature of this National Development Framework and the considerable additional powers which Welsh Ministers are accruing for themselves, not only serve to undermine local democracy and adversely affect community engagement but severely undermine the credibility of the whole planning process in Wales.

"If we are not careful, local opinion will become irrelevant and allowing this policy intervention represents a charter to ensure that major infrastructure developments can take place anywhere across Powys, at the instruction of the Welsh Government, regardless of local circumstances or opinion.

"I have grave concerns about the manner in which this policy approach has been proposed without due regard for the processes of strategic renewable energy policy formulation through national and public debate, but also in respect of the means by which the Welsh Government now seeks to embed this specific policy approach into Powys' Development Plan.

“The Welsh Government have brought forward this proposal during the summer recess, when AMs are not able to debate the issues on the floor of the Senedd.

"I passionately believe that efforts should be made to ensure that important planning decisions are made closest to the people they affect. These recent interventions by Welsh Government, reflect their desire to further centralise the important powers of elected representatives, thereby denying local people a voice and most importantly eroding the principles of local democracy.

"It is therefore crucial that the views of local people who are directly impacted by such developments are fully considered within the consultation process and that any future decisions are informed by their views."