Congratulations to Wales Air Ambulance on its 20th Anniversary 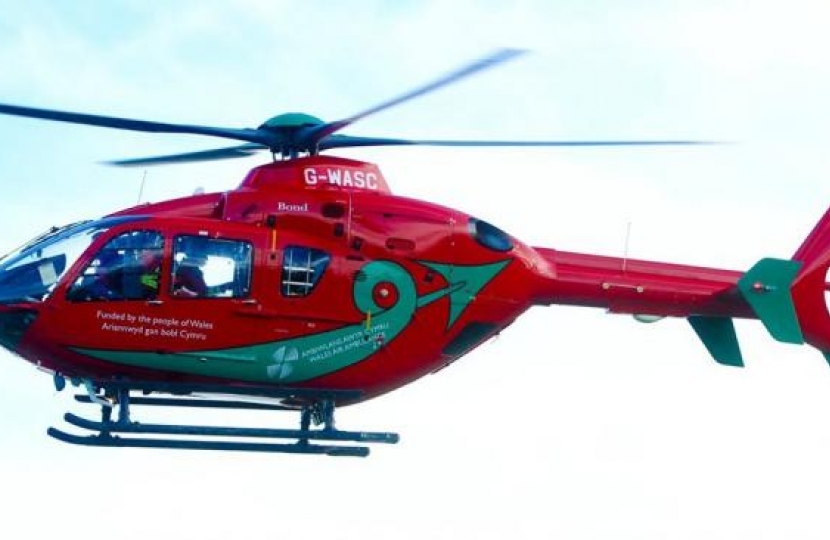 The 20th Anniversary of the Wales Air Ambulance has been highlighted in a Senedd statement by Montgomeryshire MS, Russell George.

Mr George, the Member of the Welsh Parliament for Montgomeryshire, took the opportunity to congratulate the Air Ambulance on the occasion of its 20th Anniversary, which took place on 1st March.

The Charity’s founder and first Chair of Trustees was the late Robert Palmer. From his vision, the Wales Air Ambulance has grown from a one-helicopter operation based at Swansea Airport to what is now the largest air ambulance operation in the UK, with four helicopters, including one in Welshpool in Mr George's Montgomeryshire constituency.

"I want to thank everyone who has contributed to this life-saving service over the years, for their commitment, enthusiasm, and dedication to the people of Wales.

"Over the past two decades, it has evolved from a paramedic-led service to a consultant-led service which takes the emergency department to the patient. Wales Air Ambulance has attended over 38,000 missions and needs to raise £8 million every year.

"Thanks to the people of Wales, our country now has the largest air ambulance operation in the UK and is one of the most medically advanced in Europe, operating 24/7.

"To mark their anniversary, the Charity is currently running a fundraising event called My20, which I hope will be well supported by residents from across Wales.

"I hope everyone joins me in wishing the Wales Air Ambulance all the best for the future. Thank you to all those who have been involved with the Charity, past and present."

It is a huge privilege to have been re-elected for a third term as the Member of the Welsh Parliament for our area. I would like to thank the people of Montgomeryshire for returning me with a significantly increased majority.