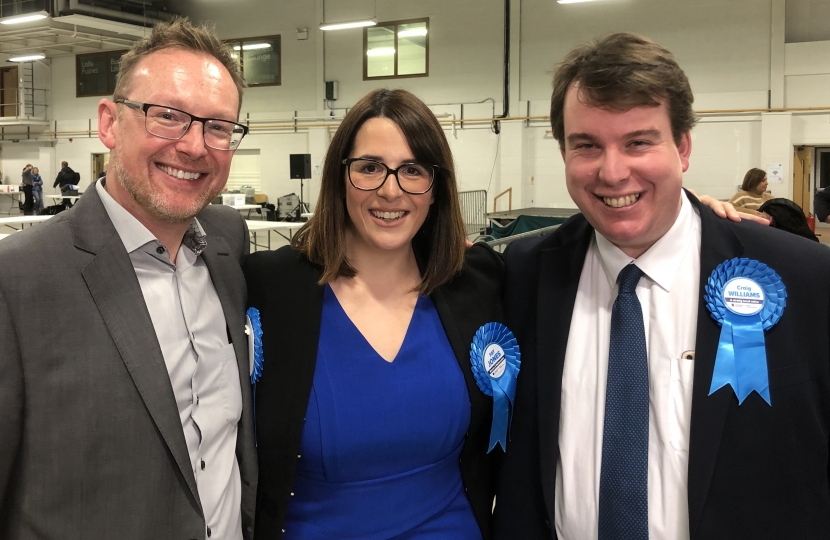 Following the General Election, congratulations have been offered to new Welsh Conservative Members of Parliament from the Assembly Member for Montgomeryshire, Russell George.

In doing so, the Mid Wales AM paid tribute to all candidates who contested the General Election for subjecting themselves to public scrutiny.

The Welsh Conservative Party won 14 seats in Wales, matching its best ever result in 1983.

“I would like to congratulate all of my Welsh Conservative colleagues who were successful in winning their seats in the General Election.

"I was of course particularly delighted that Craig Williams was elected as our Member of Parliament in Montgomeryshire. I have worked closely with Craig for many years, and I have no doubt that he will be an outstanding MP. As a person who was raised and lives in Montgomeryshire, Craig understands the opportunities and challenges for our area.

“I would also like to pay tribute to our former MP, Glyn Davies, who stood down last month. Glyn and I have worked closely together for the past decade and regardless of your political allegiance, I think we can all recognise Glyn’s passionate commitment to representing Montgomeryshire’s interests first and foremost in Parliament.

“I was also delighted that my friend, Simon Baynes, the erstwhile Mayor of Llanfyllin and a long time supporter of mine and Montgomeryshire Conservatives, has been returned as the MP for Clwyd South.

"Fay Jones is the new MP for Brecon & Radnorshire and has a real understanding of rural life. I will be pleased to work alongside Fay and Craig as our two new Conservative MPs in Powys.

"Trewern Powys County Councillor, Amanda Jenner, stood for the Welsh Conservatives in Ceredigion, and had a fantastic result, coming in second place in a seat which is normally a Plaid Cymru-Liberal Democrat marginal.

“These results, and many others across the country, show the desire of the people of Wales and the wider UK to move on from this Brexit purgatory and make progress on the issues which really matter to the UK and Wales such as delivering on the Prime Minister's commitment to deliver record funding for the NHS which I hope the Welsh Labour Government will spend on the Welsh NHS.

"The commitment to deliver a Pant-Llanymynech Bypass and an ambitious Marches Growth Deal to improve transport networks and boost economic growth across the Welsh border is also welcome and something which I pushed for inclusion in the Conservative manifesto. Crucial cross-border road schemes such as the bypass and stronger cross-border collaboration will provide a major boost for communities in Montgomeryshire.”

Montgomeryshire Assembly Member Russell George visited a new development in Montgomery hosted by NHBC, Pickstock Homes and Mid-Wales Housing Association, to see how the site is delivering much needed, new affordable high-quality homes for the region.