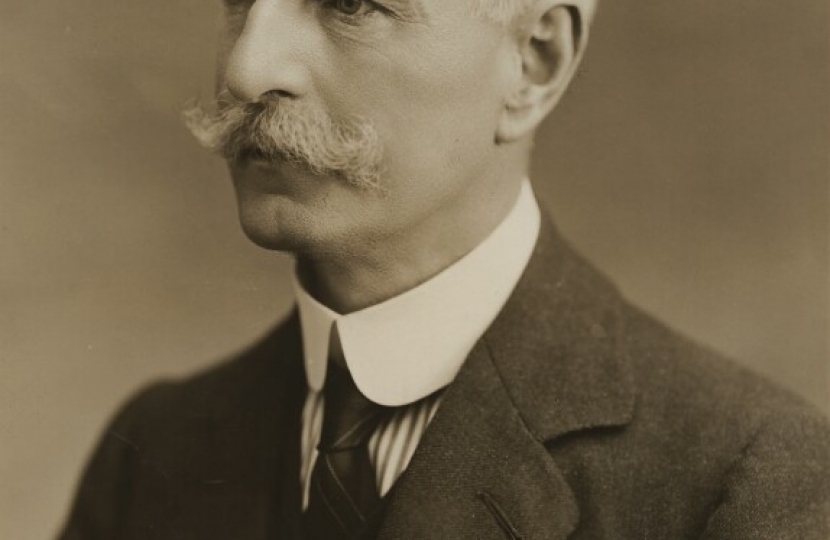 The AM for Montgomeryshire took an opportunity to make a statement on the floor of the Senedd this week (Wednesday 2nd October) to draw attention to the pioneer’s contribution to Powys’ heritage as the founder of mail order and home shopping.

A forerunner of Amazon, Pryce Jones had a draper’s shop in Newtown and came up with idea of dispatching goods to his customers by post using the railway. His mail order store opened in 1859 and the Royal Welsh Warehouse opened in 1879.

His drapery business was so popular that he dreamt up the mail order catalogue so that those who couldn’t travel to his Newtown shop could buy his goods. Queen Victoria and Florence Nightingale were among his patrons and his Welsh flannel was sold to customers across the world.

During the 1870s he took part in exhibitions all over the world, winning several awards, and he is also credited with the invention of the sleeping bag, patented in 1876. Large new premises were built in Newtown in 1878 to house the expanding business and the Pryce-Jones Royal Welsh Warehouse was opened on 3rd October 1879.

He was Conservative MP for Montgomery Boroughs on two occasions (1885-6, and during 1892); was knighted by The Queen for his services to commerce in 1887; and became High Sheriff for Montgomeryshire in 1891.

Commemorating the anniversary of the opening of the Pryce Jones Mail Order Store and Royal Welsh Warehouse, Mr George said:

“I am pleased that the Presiding Officer gave me the opportunity to pay tribute to Sir Pryce Pryce-Jones and his contribution as a commercial pioneer and forerunner of Amazon.

“I am looking forward to attending the event organised by the Heritage Hub 4 Mid Wales, at the grade 2 listed Pryce-Jones Royal Welsh Warehouse in Newtown, where we will be able to browse the Pryce Jones Archives displayed by local heritage custodians and celebrate the life of Sir Pryce-Pryce Jones who was the pioneer of mail order and online home shopping.

“On 3rd October, the exact day of the 160th Anniversary of the opening of the Pryce Jones Mail Order Store, two plaques, donated by the Potter Family and the Newtown Chamber of Trade, to mark the pioneer’s contribution to the heritage of Montgomeryshire – a fitting tribute to such prominent and celebrated Newtonian.”