Calls for urgent progress on Dyfi Bridge after yet more flooding 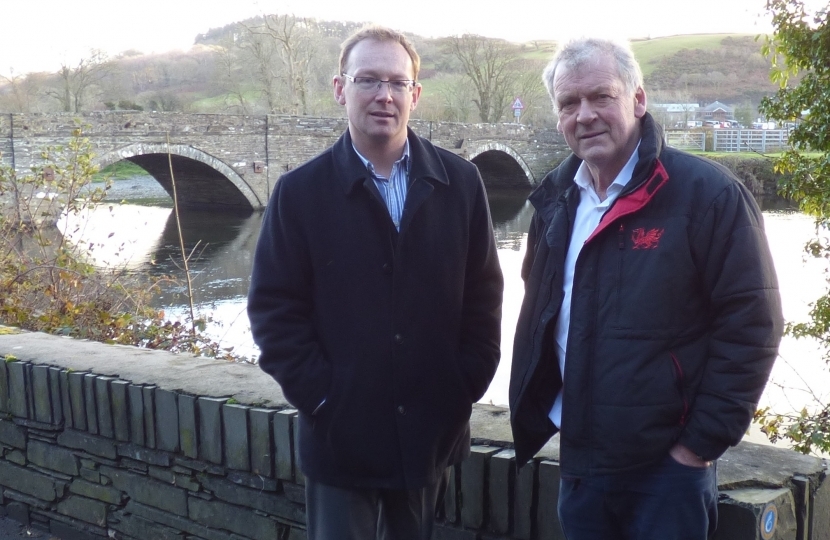 Urgent progress is necessary on a major pinch point on the A487 near Machynlleth according to local Assembly Member, Russell George.

Following recent flooding which has once again closed the Dyfi Bridge, causing traffic diversion of up to 30 miles, the Assembly Member for Montgomeryshire questioned the Welsh Government’s Minister for Transport on when he will be in a position to make a decision on the project.

The Welsh Government Minister for Transport, Ken Skates AM, informed Mr George that the Dyfi Bridge project has seen a number of changes to its scope in the development phase. As a result, he requires a revision of the final costs before being able to make a decision which is expected to be forthcoming by the end of the year.

Speaking outside the Senedd after questioning the Minister this week (2nd October), Mr George said:

“The Dyfi Bridge was not designed to carry the current volume of traffic, and is a major pinch point on the A487.

“The road is also often closed due to frequent flooding, causing traffic to take a diversion of up to 30 miles. The bridge has been closed yet again earlier this week so it is imperative that this pinch point is resolved at the earliest opportunity.

“During the recent flooding, there was a failure to monitor the flood levels by CCTV, and the flood barrier gates on the trunk road should have been opened for road access much earlier when the flood waters had subsided to a safe level.

“I can’t stress more how important it is to improve the reliability of crossing the River Dyfi and to improve access to key services including employment opportunities, healthcare and education for the people of Machynlleth and the surrounding area.

“I am pleased that the Minister has agreed to take up these practical issues with his officials but it is essential that a decision is made on the long term viability of the project at the earliest opportunity so that urgent improvements are made to this stretch of road infrastructure in Montgomeryshire.”