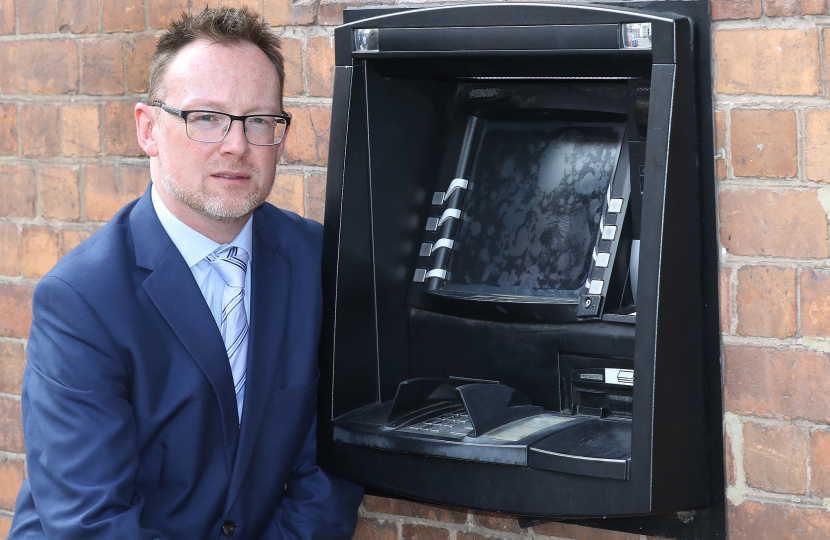 News this summer that three bank branches will close in Montgomeryshire has come as a real disappointment to local residents.

The closures announced are:

Whilst I appreciate that more people use online banking than previously, a substantial number of local people rely on high street banks to organise their lives and run their businesses.

To ensure that the voices of local people are heard, I ran a survey in June and early July on the Barclays Bank closures. The Lloyds closure in Welshpool was announced shortly after the closing of the survey.

295 people responded to the survey and highlighted concerns about:

I met with Barclays Bank in June. I outlined my disappointment to them and they informed me that they will maintain a presence in both Newtown and Welshpool by hosting bank sessions in community facilities in town centres. They have stated that they want to deliver these sessions on two days each week. While I welcome this more than a complete exit from the towns, I want to be sure that this provision will be protected long term and not withdrawn after a short trial.

A further issue with these sessions is that they are unable to deal with physical notes and coins which is a central reason why many people use in-person banking services. They argue that physical cash transactions can be done in Post Offices although I would be more than happy to help anyone who is facing issues with a particular proposed replacement service that will be put in place.

Following my meeting with the bank and the survey, I have forwarded an analysis and summary of it to Barclays Bank so that the views of residents have been heard.

Welshpool’s branch closures have also triggered a review by LINK - the UK’s Cash Access and ATM network, which assesses the impact of branch closures and identifies where new shared facilities are needed. This forms part of legislation introduced by the UK Government in May’s Queen's Speech, in protecting communities’ ‘access to cash’.

I am pleased that LINK have subsequently recommended that a new permanent banking hub be opened in Welshpool, offering shared banking access and services. Along with Craig Williams MP, I met up with LINK to discuss how this will be implemented, and to ensure that full banking services will be accessible to customers of all banks within this hub. Craig and I will keep you updated on developments.

During my time as chairman of a Senedd economy committee, we commissioned a report titled ‘Access to Banking’. These recommendations have now been accepted by Ministers.

As a result of the report, plans for Community Banks for Wales are now progressing and I hope that branches could fill some of the void left in some of Montgomeryshire’s larger towns by closures. I am continuing to engage with this organisation and the Welsh Government to encourage them to bring these facilities on stream as quickly as possible.