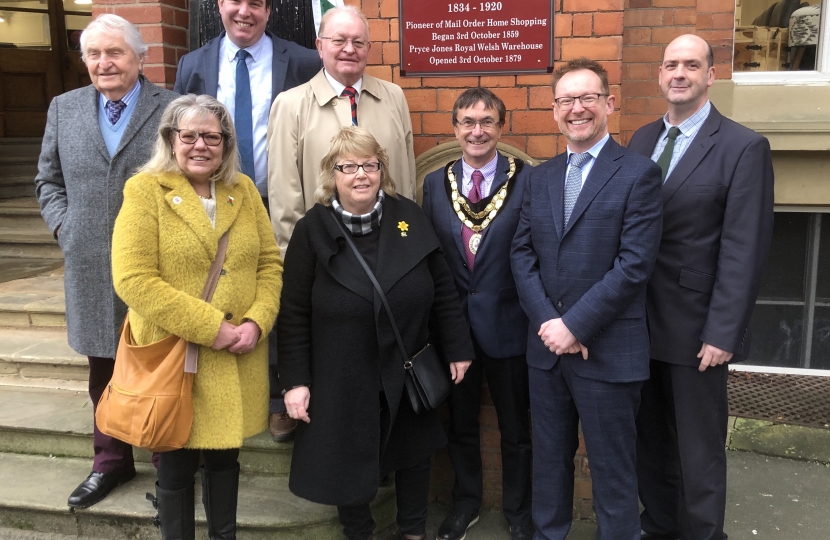 The 100th anniversary of the death of a Powys pioneer has been commemorated at the Pryce Jones Building in Newtown.

On Saturday (11th January), the Montgomeryshire AM, Russell George, joined local dignitaries and other local people to commemorate the 100th Anniversary of Sir Pryce Pryce-Jones' death in 1920 and to unveil the Pryce-Jones heritage plaques.

Speaking after the event at the Oriel Davies Gallery in Newtown, Mr George said:

"I was delighted to help, alongside the Mayor, David Selby, to officially unveil the Pryce-Jones heritage plaques which mark the life of Sir Pryce Pryce-Jones on the 100th anniversary of the entrepreneur's death.

“Today (Saturday) is the 100th Anniversary of Sir Pryce Pryce-Jones death in 1920 at his Newtown home of Plas Dolerw. He was later buried in Llanllwchaiarn Church grave side”

"Today is a significant date in the history of Newtown, which celebrates the life of a pioneer who was effectively the forerunner of Amazon and had innovative ideas which transformed the future of mail order and online home shopping."

Sir Pryce-Jones had a draper’s shop in Newtown and came up with idea of dispatching goods to his customers by post using the railway.

His drapery business was so popular he dreamt up the mail order catalogue so that those who couldn’t travel to the Newtown shop could buy his goods. Queen Victoria and Florence Nightingale were among his patrons and his Welsh flannel was sold to customers across the world.

He is also credited with the invention of the sleeping bag, patented in 1876, and was MP for Montgomeryshire on two occasions.

During the 1870s he took part in exhibitions all over the world, winning several awards, and he was knighted by The Queen in 1887.

"I was happy to highlight these anniversaries and celebrate all of Sir Pryce-Jones' achievements on the floor of the Senedd.

“I would also like to pay tribute to the Heritage Hub For Mid Wales for their outstanding work.

"This is a day of civic pride and to mark the significant contribution which Sir Pryce Pryce-Jones has made to the history of Montgomeryshire."

Montgomeryshire Assembly Member Russell George visited a new development in Montgomery hosted by NHBC, Pickstock Homes and Mid-Wales Housing Association, to see how the site is delivering much needed, new affordable high-quality homes for the region.