Working for a prosperous Mid Wales 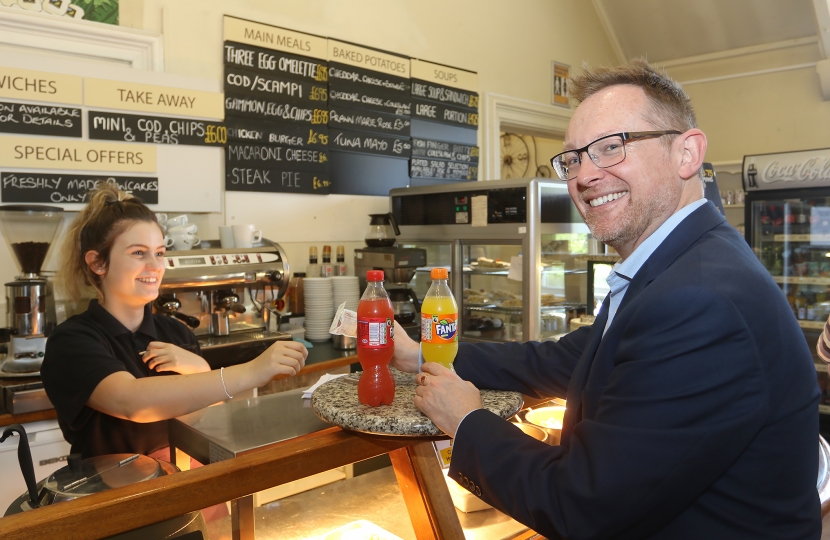 I suspect we can all share the same aim for 2020 – that is to see a Mid Wales which is more prosperous.

One of the areas of my work that I most enjoy is going to meet businesses across Montgomeryshire, whether it's one of our largest businesses, or a small business on the high street.

In December, I was delighted to support Small Business Saturday which is a grassroots, non-commercial campaign, which highlights small business success and encourages consumers to 'shop local' and celebrate small businesses in their communities. Our local high streets are instrumental in bringing people together – acting as a meeting place for friends and families and supporting jobs for local people. Let's do all we can to ensure that our high streets can flourish by shopping locally.

An area in which I feel I can be particularly helpful is raising specific issues which businesses raise with me with Government Ministers to bring about change, but more widely, I’m not entirely convinced that the Welsh Government has a road map for driving forward long term economic development here in Powys.

This is the fourth economic strategy since devolution and none of them have delivered on their original promise. This has meant that Wales continues to slip behind the rest of the UK.

In 2020, this must change and I would like to see every part of Wales benefit directly from Growth and City deals supported by UK Government funding; I want to see Wales have a number of new Trade Envoys in order to boost Welsh export activity and raise our commercial presence in both advanced and emerging economies; and I want to remove the key economic barriers for young people in Wales when trying to access jobs and training. I also believe that a strong Welsh economy should be built around sound public finances, low taxes, free trade and effective regulation; and that no new taxes must serve to over-penalise businesses or individuals such as the regressive proposal for a tourism tax which would hit Mid Wales’ tourism industry hard.

In contrast to the Welsh Government’s so-called Action Plan, which is characterised by a distinct lack of action, the UK Government has published an Industrial Strategy which provides businesses with the security and certainty to plan for their future as well as a firm foundation for improving living standards and investing in the future success of all parts of the United Kingdom. It outlines major investment in infrastructure, new investment in science and R&D, and ensures that growing enterprises have the skills and support, to create new jobs and prosperity.

The Industrial Strategy puts great emphasis on addressing the regional disparity in economic prosperity and the skills shortages which exist within Wales, which if successfully addressed, will drive increases in productivity and social mobility.

With specific reference to Mid Wales, we have already had an initial sum of money provided for a Mid Wales Growth Deal in an effort to rebalance the Welsh economy, and the new Conservative Government has also committed in its manifesto to deliver a Marches Growth Deal, investing in infrastructure to improve cross border transport networks and economic growth which is so crucial to a border county such as Powys.

I have been a long-time advocate of pushing for a Mid Wales Growth Deal and I’m pleased that the Welsh and UK Governments are currently working with both Powys and Ceredigion County Councils to develop such a deal. This followed a recommendation from the National Assembly’s Economy, Infrastructure and Skills Committee, which I Chair. The pace is not moving as I would want it to at present and I’m looking forward to scrutinising both Powys and Ceredigion County Councils when they appear before the Committee in January to provide an update on progress. The current position is that both Powys and Ceredigion County Councils are currently producing a ‘proposition document’ to articulate our regional vision. The areas of work which the two local authorities are focusing on are Advanced Research & Innovation, Energy, Tourism, Food, Skills, Connectivity (Transport & Digital Infrastructure) and support for business in terms of sites & premises.

Even though high level growth strategies are important, I do believe that immediate action can be taken by Welsh Government to stop stifling businesses in Mid Wales. For too long, Wales has had the most expensive business rate regime anywhere in the UK. While the Welsh Government has extended its high street rates relief scheme for a further year, it only applies to retail properties up to a rateable value of £9,100 and also does not address the fact that the Welsh rate multiplier is the highest in the UK. Therefore, it is a temporary fix to pressures facing small and medium businesses in Wales.

In 2020, one thing on my wish list would be to see the abolition of business rates for all small businesses with a rateable value of up to £15,000 to support businesses on our High Streets. This is what is needed to provide the wealth and job creators in town centres such as Newtown, Welshpool, Llanidloes and Machynlleth with what they need, and it is especially important in light of figures published recently which indicate that some areas experienced a drop of 3.1 percent in retail footfall, with the worst drop in the week of Black Friday when shopper numbers fell by some 4.5 percent.

In 2020, we need to do all we can to ensure that businesses are not squeezed out of existence. We need a permanent solution to help our small businesses and boost the Mid Wales economy rather than a mere sticking plaster.