Save Our Mid Wales Air Ambulance Base 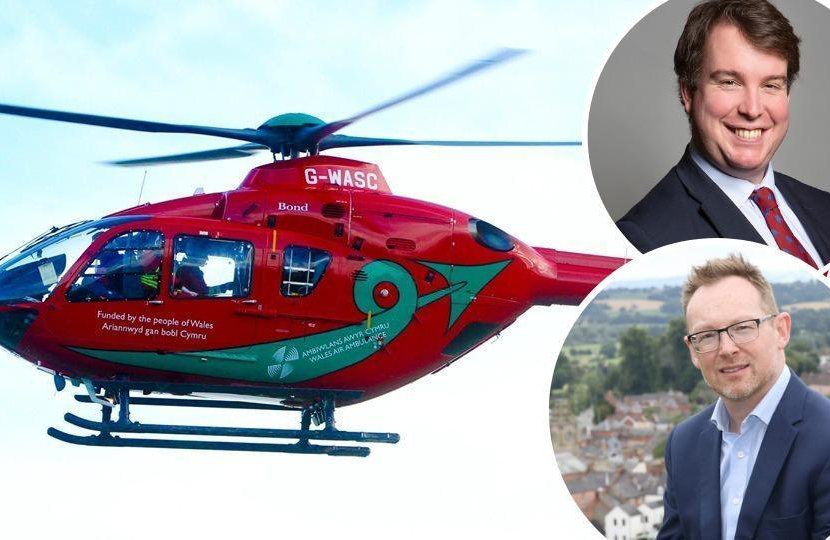 2022 brought us the surprising and disappointing news that the Welshpool base of the Wales Air Ambulance could be closed. In the latter half of the year following the revealing of the proposals, I have been working closely across-party with campaign groups and concerned individuals across Mid Wales to ensure there is a proper engagement process and scrutiny.

We now know that the public engagement process will begin on January 9th 2023. I will be sharing details about the process and how residents and organisations can input their views through my email list, Facebook and press releases.

This is an invaluable service provided by Wales Air Ambulance and the Welsh NHS to mid Wales.

There are significant concerns and doubts about the proposal to centralise the north and mid Wales service at a single site with the potential closure of the base in Welshpool.

In August, EMRTS Cymru and The Welsh Air Ambulance Trust first announced plans to reconfigure their service, which included the concerning news that they propose to close the base in Welshpool. I, along with many others, were very surprised and disappointed by this announcement, as the Wales Air Ambulance service is vitally important to us in mid Wales.

Both Craig Williams MP and I launched a survey asking for your views. Thank you to all of those who have filled in our survey. It is helpful for us to be able to present, to the organisations involved, the many voices and views of local people as possible. Thousands replied to the survey, which shows how strongly opposed our county is to the proposed changes.

We know from the responses to the survey so far that most residents, who have given so willingly to the Trust in the past, will donate less in the future if the Welshpool base closes. Understandably, people want to support charities based locally and we have presented this concern to the Trust.

The Trust stated in August that its plans will improve the numbers of missions which they are able to deliver across the whole of Wales, including an additional 26 in Montgomeryshire.

In August, Craig Williams MP and I first met with the Trust to raise both our and residents' concerns. The Trust had committed to a “genuine consultation” with residents. We have asked for the data and analysis used to inform the proposals to be shared so they can be fully and properly scrutinised.

In September, I raised my strong concerns in the Senedd with the First Minister, Mark Drakeford, pointing out that mid Wales has suffered for many years from poor access to health services. Also, I have stressed that due to not having a district general hospital and with poor road connections, it is vital that we continue to have good access to emergency services such as the Air ambulance service, which also includes the important road vehicle, based at Welshpool.

In October, The Charity made a statement and which made it clearer that the Welsh NHS (EMRTS Cymru) are leading the proposals, with the Chief Commissioner for Ambulance Services responsible for the engagement process.  The EMRTS Cymru website states that the Chief Ambulance Services Commissioner, Stephen Harrhy, is now leading the process. We are currently waiting for the public engagement process to start which will formally outline the proposal.

In November, I met with Stephen Harrhy, Wales's Chief Commissioner for Ambulance Services along with a cross-party group of other local politicians. We raised concerns through our discussions and a letter that the group co-authored to present to him about ensuring that the maximum possible numbers of Montgomeryshire residents can raise their thoughts and views. We also secured a commitment to a public meeting in January for residents and groups to attend which I will share details of as widely as I can through my website, social media and newsletter. We were informed a formal engagement process is likely to start in December, and will run though until February.

In December, I was invited by several local businesses, to meet with the Chair of Trustees, the Chief Executive and others from the Wales Air Ambulance Charity. We had a robust discussion about the future of the service and public feeling about the proposals. The charity’s team were open, clear in their answers and responded transparently to our questions. The charity also stated that the proposal to re-configure the service, was not their proposal, and they were now also consultees in the process. Everyone attending agreed that it would be important for the public of Mid Wales to engage with the Commissioner’s engagement process.

The webpage summarising the current position can be found here.

I thank to the many people who signed the petition that Cllr Joy Jones started in August, and the huge effort from the SAVE Welshpool Air Ambulance – Welshpool Base volunteers. Many others have also helped obtain further signatures to the petition and sponsored or donated money to pay for signs campaigning against the proposals.

We in Mid Wales deserve better health and emergency services, and I will continue to work with all that support that aim.

As the Welsh Government is responsible for the Welsh NHS, I will continue to call on the First Minister to release and ensure all the relevant information is published and ask that there is a formal consultation on their proposal.