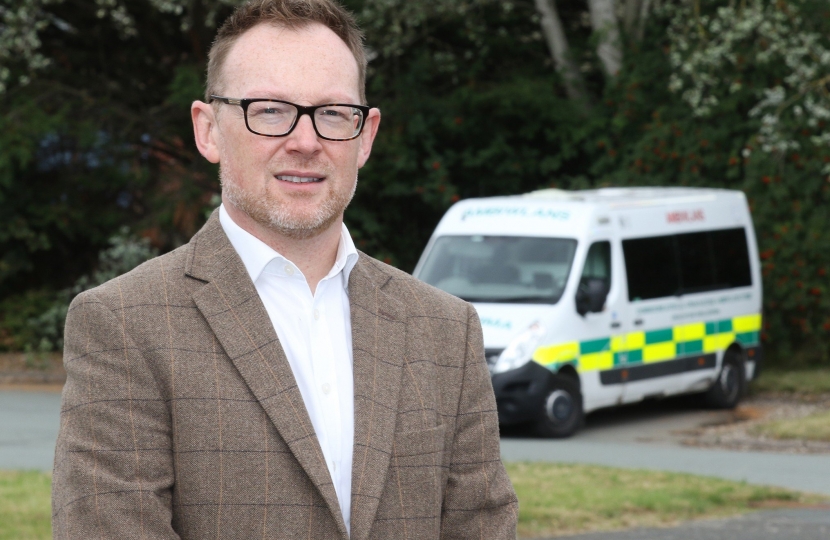 The Welsh NHS has been the responsibility for the Welsh Government for two decades. For every pound that is spent on a patient in England, the Welsh Government receives £1.20 to spend on a patient here so there's no excuse for under-funding. Welsh patients wait longer for tests, longer for treatment and longer in emergency departments than over the border in England. Although we depend so much on health services across the border in Shropshire, Welsh patients are still treated under ​Welsh Government guidance.

Some residents here in North Powys rely on Wrexham Maelor Hospital which is like every other Welsh hospital; it has wonderful, dedicated and hardworking staff​ but they are overstretched and under resourced and as a result it posted its worst A&E performance figures ever with just over 49% of its patients spending less than 4 hours in the emergency department against a 95% target - the worst in the UK and the worst on record.

​This is just one example and the accountability gap in the Welsh NHS must be addressed. ​I and my Welsh Conservative colleagues have suggested a five point plan to address this and make the Welsh NHS safer and more accountable - a listening NHS which responds to those it serves.

1. the system of Welsh Ministerial appointments to health boards should come to an end with the introduction of elected health commissioners directly accountable to the public in each health board area they serve.

2. there should be a duty on all NHS staff to disclose and record when things go wrong including providing details to senior managers and reporting them to the healthcare inspectorate.​

3. there should be a Welsh NHS Leadership Council with which all senior managers and executives will be required to register. Those found responsible for serious NHS failings will be deemed incompetent, removed from the register and prevented from working in the Welsh health service. ​

4. there will be a radical overhaul of the healthcare inspectorate to make it entirely independent of Welsh Government and give it new ​powers to intervene quickly when problems are identified. We will also treble its budget to expand its programme of unannounced inspections and ensure that requirements for improvement are implemented.

5. the independence and capacity of Wales’ Community Health Councils should be protected, by removing the ability of Welsh Ministers to appoint their members and increasing their funding to support their work as patient watchdogs and provide more support for patients raising concerns and complaints about the health service. ​

Turning to the local provision of healthcare for the people of Powys, the decision by the UK Government to approve plans to build a new emergency (A&E) service in Shrewsbury is welcome and comes after years of debate and campaigning over Shropshire's hospital services.​

Earlier in 2019 plans were given the go-ahead to transform hospital services for the half a million residents of Mid Wales, Shropshire and Telford.​

However, Telford and Wrekin Council had challenged the decision-making process and recommendations. It formally referred the matter to the UK Government's Health Secretary, Matt Hancock, who then asked an independent panel to look into the matter further before making a decision.​

The "Future Fit" Board had already considered the outcome and feedback from a public consultation; impact assessments on the different options and the findings of an independent review and the Health Secretary accepted advice of the independent panel that the "Future Fit" Board should proceed with the new emergency centre based in Shrewsbury alongside significant improvements in other types of care. This represents an investment of over £300 million in world class critical and emergency care now being invested in Shrewsbury.​

This will be positive for us in Mid Wales as not only will we see life-saving emergency healthcare located in Shrewsbury, a more significant service than a standard A&E with the large investment that comes with it, but we will also see the return of the women and children’s consultant-led inpatient service return to Shrewsbury. ​

I think it’s also important to point out that both hospitals will continue to provide adult and children’s outpatients services and diagnostic tests as well as a 24-hour Urgent Care Centre, Day Case Renal Unit and Midwife-led unit.

It is also essential that some planned care is delivered locally in our local community hospitals in Llanidloes, Newtown, Welshpool and Machynlleth, to prevent the need to travel out of county to see a consultant. Going forward; I will be keen to understand how the Shrewsbury and Telford Hospital NHS Trust will work in partnership with Powys Teaching Health Board to achieve this going forward.

Nevertheless, this decision is a milestone which marks the point where the Shrewsbury & Telford Hospitals Trust has begun to confront its challenges and makes the necessary reforms which will allow it to attract top class consultants and clinicians. I am hugely encouraged by this decision which I hope will allow building works to commence on the Shrewsbury site for a new Emergency Centre by the end of 2020.​

During the Autumn, I met with the CEO of Powys Teaching Health Board and was given the assurance that despite technical challenges they are committed to improvement work to Bro Ddyfi Community Hospital and the health board has informed me that that they expect to start work on the site in 2020.​ This scheme will be a major improvement to the facilities at the hospital but I just feel people are not going to believe that the redevelopment of Bro Ddyfi Community Hospital is going to happen until they see diggers in the ground.​ The changes to the timescale is frustrating and I’m eager to see progress on this important scheme. I will be also be raising this matter again with the Health Minister, Vaughan Gething.

It is welcome news that Newtown is to receive £2.5 million of funding from the Welsh Government’s £100 million Transformation Fund to back new ways of delivering health and social care services.

This funding will see the development of a state of the art new facility in the Newtown area to offer more services locally and bring the latest technology and training to Mid Wales.

The funding announcement is an initial sum and further funding will have to come forward as the project and new facility moves ahead.

I have been raising the need for a new health facility with the previous and current First Minister of Wales, and no meeting that I have had with Powys Teaching Health Board's CEO takes place without a discussion about a new facility based in Newtown.

The fact that this funding and project is now a reality is good news, but I would also urge caution as planning and the new build that will take place will take some years and in the meantime we have to ensure that current GP and hospital services are supported and strengthened.

A town centre location is the correct place to help further regenerate the town centre, but the proposals also need to demonstrate that the new facility will help to strengthen health facilities in other towns in North Powys.​

In the meantime and while we await this new facility, I will continue to lobby for improvements to support existing health services in our area.

In 2020, I would like to see the Welsh Government provide additional resources to the Wales Ambulance Service NHS Trust to ensure that patients suffering from serious medical conditions, including strokes are not put at risk of unnecessary harm.​

Ambulance staff work extremely hard, providing outstanding support, often in difficult circumstances in an effort to deliver the best possible care to patients but they are simply not receiving adequate resources from the Welsh Government to do their job effectively.​

Reports that those in Powys with serious medical conditions, such as strokes are waiting too long for a response to an Amber ambulance call because of the lack of ambulance response time targets in Wales for this category of medical condition underlines the importance of the need for additional resources to be provided by the Welsh Government - both in terms of the number of ambulances on the road here in Mid Wales but also an increase in the number of paramedics and medical staff.​

The safety of patients is being threatened and I will continue to call on the Welsh Government to listen to expert advice and the calls of deservedly worried members of the public until such time as this very serious issue is addressed and target times for responses to Amber calls are put in place.

The service which sought to reduce suffering and enhance quality of life for those who suffer with chronic pain conditions served 400 patients in Mid and North Wales; many of whom were left in the lurch after receiving little or no communication about their future pain management provision after the closure of the service.​

In many respects, chronic pain management, is a forgotten service and experiences a number of operational and clinical challenges so I am hopeful that the Welsh Government will work with the Chronic Pain Policy Coalition and others with an interest in this area to strengthen the overall provision of chronic pain management in Wales.

I would like to see the Welsh Government take action to help radically improve access to hospice and palliative care for everyone across Wales.​

I recently spoke in a debate in the Senedd, during which I paid tribute to the Llanidloes Palliative Care Suite which was officially opened in May 2018 and was fully funded by the Llanidloes League of Friends and the local community.​

I would like to see effective collaboration between the NHS and charitable sector and would like to see hospices and palliative care centres in Wales receive more statutory support from Welsh Government to allow them to continue to provide the level of services and support they currently deliver to those coming towards the end of their lives.​

Given the current pressures in Wales on the NHS and number of available hospital beds, hospices provide an opportunity to allow people to access the support they need outside of a hospital environment and according to their own preference.

Therefore, I believe that Local Health Boards should develop close working relationships with hospice providers to allow people to access an holistic package of care and we need to see more leadership from the Welsh Government to deliver a more proactive approach to help hospices and palliative care suites meet future funding and operational challenges.

The Welsh Government needs to ensure that the true value of the services which hospices provide to people needing end-of-life care, their families and communities is recognised by using its forthcoming draft budget to increase its support for hospices across Wales so that we become a compassionate country. ​