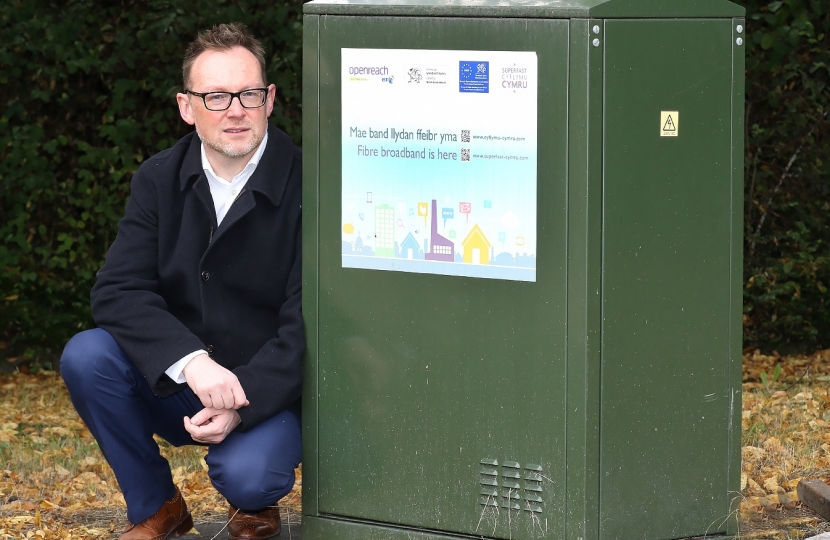 85% of Montgomeryshire’s residents can benefit from superfast broadband coverage and almost a quarter can benefit from ultrafast speeds via fibre to the premises. This is big improvement on the position from just this time last year. But my focus continues to be on getting this percentage up to 100%. For many communities across Montgomeryshire, broadband connectivity remains a distant dream and I sympathise with this frustration from the “have nots”.

A higher proportion of premises in Montgomeryshire are still without access to so-called "decent broadband" of 10 megabits per second compared with the average for Wales and in the rural parts of Montgomeryshire, the gulf between the "haves" and the "have nots" rises further.

Broadband is now considered the fourth utility, is an essential part of modern life and is no longer a "nice to have" luxury. It is also essential for a thriving Mid Wales economy so from my perspective, I will keep asking probing questions of the Welsh Government and Openreach until such time as all people in Montgomeryshire are able to benefit from the same high speed broadband which is enjoyed and taken for granted by people in more urban areas of Wales. If you would like me to make enquiries on your behalf on the options available to you, please don't hesitate to contact me by emailing russell.george@assembly.wales

It has to be matter of great regret that some communities have been left stranded following the conclusion of phase 1 of Superfast Cymru and it is unbelievably frustrating for constituents to see fibre cables hanging from poles just metres away from their homes without any way to access a fibre broadband service. This ought to be addressed as a matter of urgency.

I also believe that there should have been a seamless transition between phase one and two of the scheme. This delay, and the relative lack of specific information on the timetable for the delivery of a broadband upgrade on the Welsh Government and Openreach broadband checkers, have both served to add to the frustration of people who remain without any broadband at all, not alone high speed broadband.

Going forward, I would like to see the Welsh Government issue quarterly updates on the number of premises connected under the scheme and I would also like to see a change in approach where the terms of reference of the Superfast Cymru programme are changed to compel Openreach to prioritise the digital connectivity of those premises which 1) cannot receive a decent broadband connection at all; 2) to those that cannot get 30 Mb/s Next Generation Access approved superfast broadband; and then finally to the remaining premises rather than picking the low hanging fruit. This would ensure that those premises who most need an upgrade will be provided with decent digital connectivity before those which already receive adequate broadband and are relative "easy wins".

In this report I’m also providing a few useful links.

An online checker is available so that people can see whether their home or business is scheduled to be considered for an upgrade at https://www.openreach.com

I also wanted to outline the options available to premises not covered by the latest phase of the rollout. Details of these such as the Access Broadband Cymru scheme and vouchers for businesses are available here: https://gov.wales/go-superfast/boost-your-broadband

Residents may also be interested in a Community Fibre Partnership (CFP) where Openreach work with a local group representing two or more premises to bring superfast broadband to an area. Where possible, Openreach bring together funding from Local Authorities, Government voucher schemes and other grants to help make things affordable, plus Openreach contribute toward the cost. More information is available: https://www.openreach.com/fibre-broadband/community-fibre-partnerships

Also, as part of the UK Government’s Rural Gigabit Connectivity programme, the Gigabit Voucher Scheme has been launched which provides funding assistance for superfast connectivity to rural areas. Businesses and residents in some of the hardest to reach places in the UK, with broadband speeds of less than 30 megabits per second, are eligible for vouchers worth up to £3,500 per small/medium business and £1,500 per residential address. The vouchers can part or fully fund a CFP scheme. More information is available here: https://www.gov.uk/government/publications/rgc-programme-key-information

When it comes to mobile coverage, voice services from at least one operator are available in 96% of Montgomeryshire, but availability from all operators is significantly lower at 68%. The availability of 4G services from at least one operator is 87% and 4G availability from all four operators drops to 49%. Nevertheless, mobile coverage in Montgomeryshire continues to lag behind the Wales and UK average and I have ongoing discussions with all mobile providers, highlighting areas where there is no mobile signal at all. My most recent discussions have been with the mobile operator EE. EE customers across the area, who once had good signal, are now finding that they have poor or no service at all.

While operators must bear some of the burden of tackling some of the hardest valleys and communities to reach, public sector intervention, in terms of both policy change and political support, will be needed. The Welsh Government's Mobile Action Plan, which is now three years old, has been proven to be little more than a set of warm words rather than concrete commitments, and unfortunately, the drive behind that plan seems to have dissipated with none of the proposals yet implemented in any meaningful way.

During that same time period, we have seen new planning policy and updated guidance in England and Scotland which has helped prepare for 5G deployment and speed up the process for new mobile phone masts in appropriate locations; a pilot of non-domestic rate relief; the launch of a publicly funded capital investment project in Scotland and an updated accord with National Parks England that recognises the importance of digital connectivity to the residents, businesses and visitors to these sensitive rural areas.

This political inertia in Wales when it comes to creating the right regulatory, political and commercial conditions necessary for mobile operators to invest in digital connectivity is putting Mid Wales at a further disadvantage so in 2020, I will continue to press the Welsh Government to use the devolved policy levers at their disposal and commit to a public date by which these much needed reforms will be delivered so that Mid Wales doesn't fall further behind.

I also recently conducted an online survey about mobile coverage in Montgomeryshire and I'm grateful to those who took part. 45% of respondents said that they were EE customers and 15% said they were Vodafone customers with other providers making up the remainder but coverage both at home and "on the move" was generally poor with 53% of respondents complaining of very poor or non-existent coverage in their area and only 15% confirming that their mobile signal was excellent or good.

In October 2019, the UK’s four mobile network operators (MNOs) and the UK Government also announced a £1 billion proposal to build a Shared Rural Network that would see 4G mobile coverage extended to 95% of the UK’s landmass.

Both industry and the UK Government have now reached a formal agreement in the near future in what should be a positive development for mobile coverage here in Montgomeryshire.