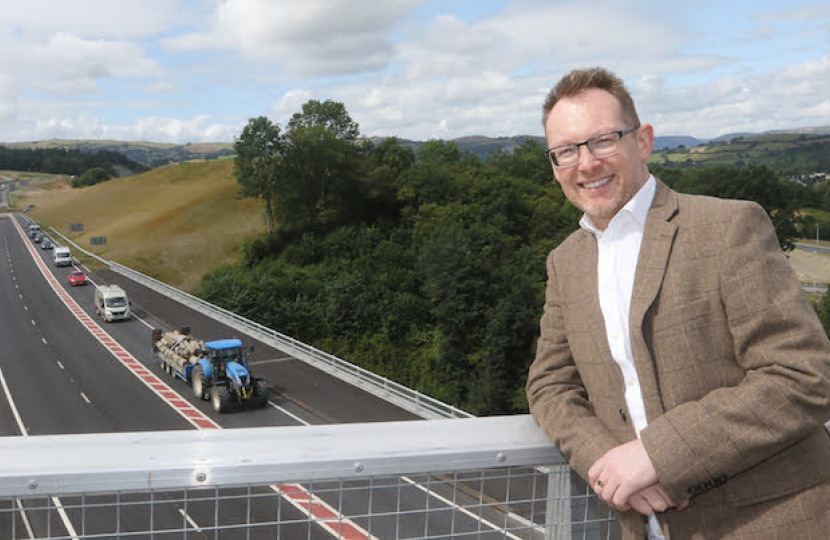 Ever since I was elected to the Welsh Parliament, I have been campaigning for better transport infrastructure for Montgomeryshire. Good transport connections are key to improving the local economy which is why I actively campaigned for the Newtown bypass and continue to campaign for other important road improvement schemes as well as improving road safety. It is reported that sadly Powys has one of the highest road accident rates leading to someone being killed or seriously injured on our roads per 100,000 population and the reason I continue to call for road safety improvements.

I am pleased that work is progressing on the construction of the new Dyfi bridge and road scheme. The old bridge was never designed to carry the current volume of traffic and is often closed due to frequent flooding causing traffic to take a diversion of up to 30 miles.

The new Dyfi bridge will improve the reliability of crossing the River Dyfi and will improve access to key services including healthcare, employment opportunities and education for the people of Machynlleth and the surrounding area.

Some of the works taking place includes, building flood bunds; installing emergency pumping facilities; starting earthworks for the new bridge deck; the construction of a new bridge crossing the River Dyfi; and building a new road layout at both ends of the road scheme. The new bridge and road scheme is due to be completed by next Spring (2023).

The campaign for a Pant-Llanymynech bypass remains an important road improvement and safety scheme.  Both the UK Government and Welsh Government have given commitments to the Pant/Llanymynech bypass and are working together to progress the scheme. I had a meeting last year with the Welsh Government’s Economy Minister; the previous MP Owen Patterson; and Craig Williams MP to discuss progress. Highways England are leading on the project development in consultation with Welsh Government Transport officials.

Frustratingly, the Welsh Government has put a hold on the construction  of all new roads in Wales subject to a review. This scheme has to be funded by both Governments. Craig and I continue to raise this with the Welsh Government, emphasising the importance and the need for the bypass.

There are other smaller road schemes proposed to resolve traffic flow and safety concerns including at Moat Lane crossing near Caersws with a proposed roundabout replacing the current junction. Also in Caersws, along with County Councillor Les George and others, I have been promoting a new footbridge over the river.  The current bridge is dangerous for pedestrians crossing. Work to progress this scheme has been slow and has been hampered along with other smaller schemes due to Welsh Government putting a hold on the building of all new schemes subject to their review.

A44 Llangurig to Aberystwyth

I continue to call for safety improvements along this route which has one of the worst accident records in the UK. Welsh Government have at last recognised the need for improvements and are carrying out a study identifying transport problems on this road between Llangurig and Aberystwyth. The study includes addressing road safety, junction efficiency and the overall condition of the road.  I will continue to pursue this safety need.

Sadly, the rail service we receive in Montgomeryshire continues to be poor with trains regularly being cancelled, delayed or overcrowded. I have been continually raising concerns about the performance of Transport for Wales on the Cambrian Aberystwyth to Shrewsbury line and have been seeking assurances over commitments made by Transport for Wales and the Welsh Government.

A new fleet of trains is being built for the Cambrian Line and are due to be running from 2023. I am assured that these trains will deliver increased capacity for passengers and will also run with faster acceleration, allowing services to meet the timetable more reliably. I continue to raise the frustration of this poor service and seek assurances that the new trains will indeed deliver a better service for us locally.